Review: Everything Beautiful Began After by Simon Van Booy 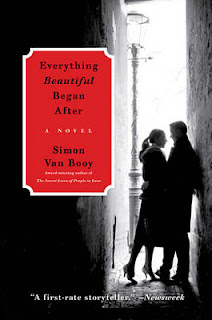 Simon Van Booy brings to the page his unique talent for poetic dialogue and sumptuous imagery in this his remarkable debut novel of love and loss, dependence and independence. Rebecca has come to Athens to paint. Born and raised in the south of France, Rebecca's mother abandoned her and her sister when they were very young, left to be raised by her loving yet distant grandfather. Young and lost, she seeks solace in the heat of Athens. George has come to Athens to translate language. Dropped off at a New England boarding school when he was a child, he has close to no relationships with anyone, except the study of ancient language and alcohol. Henry has come to Athens to dig. An archaeologist, Henry is on-site at Athens during the day, and roams the Agora on the weekend. Three lost and lonely souls whose worlds become inexorable enmeshed with consequences that ripple far among the ruins of ancient Athens.

Simon Van Booy has a beautiful way with prose that left me in tears at some points when reading his two short story collections ‘Love Begins in Winter’ and ‘The Secret Lives of People in Love’. So I was eagerly anticipating his first full novel ‘Everything Beautiful Began After.’

And it does contain a lot of the things that I loved in Booy’s shorter prose. His trademark lyrical beauty and skill with words is present throughout, but unfortunately some of the skill that weaves his stories together isn’t quite as tight when lengthened to encompass an entire novel.

The story is divided into four ‘books’, each dealing with a new phase in the story. Book one covers half of the span of the novel and is exquisite. Told in third person the story details Rebecca, Henry and George in both the present and the events in their past that have shaped them into the people they’ve become. It twines their lives together beautifully and I loved reading this section. I was swept away in the descriptions, the scenes and the use of all the senses to create the world of Athens. It’s melancholy, stunning, a little depressing but utterly gorgeous.

However, books two and three really didn’t do it for me. They’re told in second person perspective although still from Henry’s side. The lyrical beauty of the first book is turned here into an overly obsessive list of things that ‘Henry’ can see, feel and hear. It became overly depressive and as a result I just wanted it to be over. I don’t mind depressive books – book one is depressing, but it couples that with beauty. This was just pressing and heavy and I wanted to finish it as quickly as I could.
That’s not to say it wasn’t still good and well written – it just wasn’t my cup of tea.

Book four made me feel a little less like sitting in a corner and crying – it offers hope at the end of grief and darkness, and leaves the reader with a lot to think about long after the last page has been turned.

Van Booy’s first book is a gorgeously melancholy look at love, grief, death and the way that grief can distort our memories and thoughts, and take on a life of its own.