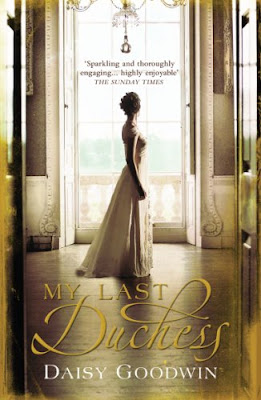 Cora Cash, possibly the wealthiest heiress in 1890s America, has been raised to believe that money will open every door to her.  But when her mother whisks Cora to England to secure her an aristocratic match, Cora is dismayed by the welcome she at first receives.  The great English houses in which she is entertained are frosty and forbidding, dogged by intrigue above stairs, and gossip below.  And it is only when she loses her heart - to a man she barely knows - that Cora realises the game she is playing is one she does not full understand, and that her own future happiness could be the prize.
This book has dogged me in every bookshop I went to until I finally bought a copy and set it aside to read on my holiday.
Ironically the book is set for the most part in Lulworth, only a few miles from where I’m staying, so it added an extra layer of interest for me as I explored the coast that the book is set on.
It was a delicious read, allowing itself time to unfurl and creep into every part of your thoughts. I haven’t been able to shake the book, even days after I finished reading it. I want to re-read, to go back and re-immerse myself in the world. Goodwin’s level of research and eye for detail is astounding. It is pitch perfect and rings true as an accurate portrayal of the age. Most books I’ve read set in this period focus on the London season, so it felt like a nosey snoop into the private life of the titled country house life.
I loved the changing viewpoints – it really kept the story fresh and offered a variety of facets to each character and storyline. Whilst most of the story was told with Cora as the central character, the view frequently change to incorporate virtually every other character at one time or another, most frequently Cora’s maid, Bertha. My only complaint was at one or two points I felt like I was being given too much information at once, for example the section from Mrs Wyndham’s pov just felt like it was too much at once when I wanted to get back to the story.
I also loved how deeply into the characters Goodwin delves. There are no bad people and good people, just multiple facets and true representations of the situations and emotions that can shape or change a person. I liked Cora from the outset, and even though she’s effectively a spoilt rich girl she never is unlikeable or inaccessible for me as a reader to get in and empathise with her.
The little titbits of information that are scattered throughout so the reader can piece together a lot of the history makes the read a really intriguing one, and then to be given the final version of the story at the end suddenly all the clues you missed make sense.
However I wasn’t certain how I felt about the end. On the one hand it was a lovely neat tidy end to that thread. On the other I wanted to see the other possibility explored as well. It felt like a neat end to one of the parts of the story, but there was still so much I wanted more of and answers to – I didn’t want the book to end basically. Or possibly give me a sequel?
It was so good to have a period romance that delved so much deeper than a lot of the fluff I like to read. These were people, there were no happy endings, no shocking twists at the end that the hero and heroine overcome. It was just people, in a different time certainly, but dealing with issues we know and can relate to – love, money and power and what that does to people and their relationships.
I loved it, I highly recommend it, and I kind of want to go straight back and re-read it. A period romance with so much more depth to it than you’d expect from the genre – and a beautiful exploration of the period.