Gossip Girl Review: The Princess and the Frog

'The Princess & the Frog'
Where Chuck screws up, and Blair gets her fairytale
Previously on Gossip Girl: Serena was a whiny bitch (again), Vanessa got dumped by Dan (again), Raina continued to bug the UES side with her inane ploy to meet her (dead) mum, Blair might just get her fairy tale ending after all (again.) 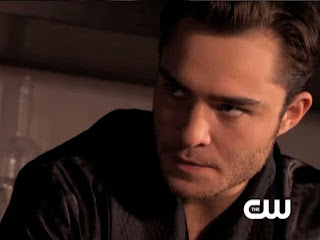 What is with the camera angles when Chuck is on the phone? Are we drunk? Were the cameramen drunk? You know what, given the plots of this season, I think this gives us the proof that the writers have been drunk all along. That thought is comforting… I’d hate to think they were in their right minds and did all this intentionally…
I heart Blair Waldorf – and I love that she is actually happy, with a nice guy who obviously cares about her (and who has enough money and social standing to keep her happy.)
(Seriously what the hell is wrong with the cameraman? If this whole episode turns out to be a dream I’m gonna go on a rampage.)
Serena – get out. Could she be anymore of a bitch right now? Actually scratch that, we know she can. But this is completely unfair how she’s acting about this.
Louis is far too cute. He’s in my good graces.
Aha I love that! Adoring look, adoring look, absentminded look round the room – oh, you’re still here, you inconsequential cretin. At least B still has it.
Good God, is Serena *actually* being mature? Really?
I don’t believe it… 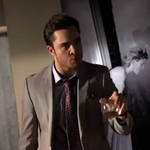 Dorota: I worry she moving too fast.
Dorota officially has the sixth sense, or possibly the only sense on the UES.
Shifty eyed Serena is totally up to no good. Never trust a girl who can have temper tantrums to rival a two year old, to be mature and put a grudge to one side.
Also hearting Dan right now. “Well hello Jeeves.” Finally someone has recognised Rufus for all he truly is – a glorified butler. Although loving that him and Lily are watching Downton Abbey. Which one I wonder, the complex British version, or the dumbed down one they sent over to America?
Rufus being something other than a butler? Are they actually going to give him lines and a plot?
And stop pretending to be wary of Dan’s incestuous relationships – no one even seems to care he can’t date outside the gene pool.
Where is the pro-active Chuck who fights for love? Oh right, at the bottom of the whiskey glass.
Charlie is growing on me – despite Dan’s obvious flaws over VDW women – and I’m kind of hoping she sticks around beyond this season. Although if she turns into another Serena I am going to regret ever saying that. 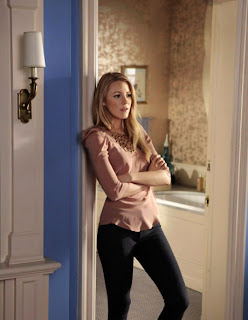 Also she’s kind of weird/babbly/geeky. It’s time we had a geeky likeable girl on the show. I bet you she watches Buffy re-runs at night…
OH VANESSA WHEN WILL YOU LEAVE? Just because she happens to still be in the city doesn’t mean she needs to stalk Dan. It’s creepy and gross.
Aw no no no, please let it all be ok! I like this fairy tale, it was nice, it was what Blair deserves!
URGH. I hate Serena, it’s official. She’s not even awesome in her plans like Blair is.  Second rate and tacky. Yeah that’s right Serena, I just called you tacky.
AHAHA! “Where he staying? Royal or no, Vanya go over do some damage eastern European style.” I LOVE DOROTA. “Maybe I do damage myself…”
Louis gets points for bringing Blair peonies. 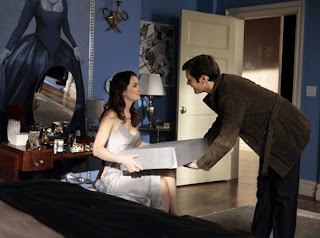 Ok, kind of sudden, but also kind of cute that Louis wants Blair to be at the cocktail cattle market tomorrow night. I like this couple in a different way to all the other boys Blair has been with. It’s safer, he’s nicer, and there’s less chance of espionage and trickery.
“Courting with rings.” Really? Kind of weird, but ok. Couldn’t they just have a long engagement? Urgh, and why tell the traitor anything about it?..
I love that Eric knows the false friendship tone of voice that will result in backstabbing and bitchy fights. He’s such a savvy UES. He deserves to be happy to – writer’s, sort it out. 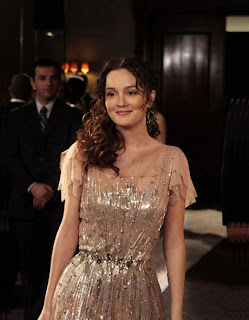 *ignoring this plot line until it gets interesting. Although has man bangs had a hair cut?*
Dan gets points for awesome comments to Rufus. “You look like the fonz.” Also, does Eric just have a constant rota of people with which to amuse him? He’s not under house arrest, does he ever go out anymore?
Did Dan just do scout’s honour with chop sticks?...
Vanessa. Get out. Now.
Although I am amused at Charlie’s choice of reading material.
Charlie also gets points for sass. That was a move reminiscent of a younger Blair. Should we be worried?
Urgh. Print outs from Gossip Girl? I am really not all that impressed with this selection of Royals. They take advice from teenage girls, then call them back personally to thank them, and accept dossiers of website print outs form the same girl? Urgh. Plot holes galore. This just isn’t plausible. Although, what is on this show? I just tend to expect a little better from them.
Did Blair just sweet talk her way into an invite? That was some speech from her, and she’s right. At least her skeletons are actually out in the open, unlike a lot of other potential candidates. 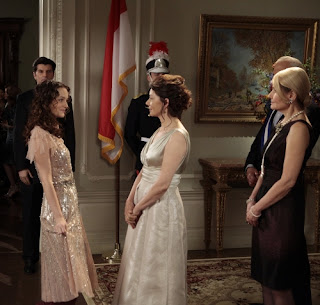 Crazy camera angles alert.
There’s something absurdly cute about the PI reading a love letter to Chuck. You knew that romance was gonna come one day… Although I did expect Nate and Chuck or Dan to happen first.
Bart Bass- murderer? Wow Chuck, you’ve got a long way to go if you’re ever going to live up to your father…
Urgh why can’t Chuck see his Dad for the screw up he was, decide to be a better man and move on. This Chuck that’s drinking and wallowing is not the Chuck that we’ve come to know. This is previous season’s Chuck. He’s grown since this, and the writer’s are doing his character a disservice by taking him back down to this again.
I love Dorota ridiculous amounts right now. Of course it’s her giving Blair a lesson on who is who, who is related to who, and whether she curtsey’s etc. It’s awesome. I hope this relationship with Louis works out, because there’s a lot of really awesome story potentials with that. Actually, can we just have the Blair Waldorf show? I’d watch that. 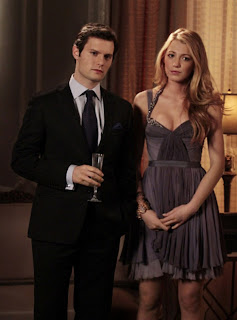 Oh god he’s so cute – I want my Louis now please.
Charlie is now a true UES – she’s learnt to use Bing.
“No one understands what we have.”
“Yeah no one understands because it’s not normal.”
Wow, maybe Man Bangs has been growing some sense up there. Although Chuck is verging on slightly scary drunk by now.
HA! Up yours Serena, Eric was right when he said that Blair level of scheming only works for Blair. Could she look any more like Blair just shoved a lemon in her mouth?
Urgh, stop with the weird camera angles – I feel sea sick. 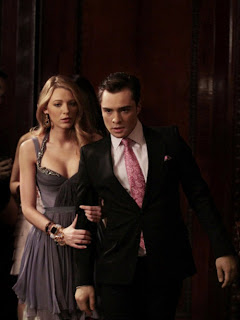 Wait he’s crashing the party to propose instead? He is so messed up right now. Seriously this isn’t even romantic Dark Knight stuff anymore, he’s just a mess.
Blair is kicking ass at this party. Love the little titbits that Dorota made her brush up on about the competition.
Uhho, is Chuck even able to stand up without the help of the bar? Ministry of silly walks, I think you’re about to get a new entry….
Oh god, Chuck is so going to ruin this for her.
Wow, did Man Bangs just grow a pair and go against Chuck?
Oh. My. God.
Despite how badly wrong Chuck is getting this, his “Tell me” is kind of heart breaking too.
Smackdown for Serena. Although hopefully Louis hearing that will mean good things for Blair.
Is Dan going to teach Charlie that ultimate art of a take down? And who would have thought at the very start of Gossip Girl, we would ever witness Dan Humphrey teaching lessons about the UES? 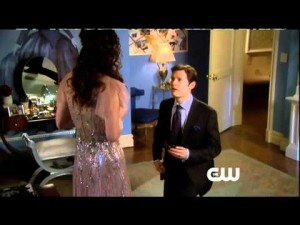 I just went a little mushy inside. And that ring?! I likey.
Wow, I think Charlie just grew horns – that girl is a little bit evil…
Urgh, drunk Chuck. Why would Blair go see him alone? This can never end well.
“You’ll never marry anyone else, you’re mine.” Oh god, not good.
What the what? Although I’m kind of glad Nate was in the flat.
How can Chuck claim he loves her? I know he’s drunk but that is no excuse. If he loves her, he wouldn’t treat her like that. He wouldn’t try to force her, or hurt her, or manhandle her, or punch a glass wall. That’s just unforgiveable.
He’s done a lot of bad things over the last four seasons – he’s done a lot of them to Blair, but she (and us as a viewership) haver always explained it away and forgiven him. I think he’s gone too far this time. This is unforgiveable. The only thing worse would have been if he’d actually forced her. The Chair romance has been one of the best things about this show, and the writers have just destroyed that.
Hm, Jack’s coming back. Oh goody. More bastards to contend with. Jack is just as bad as Chuck. 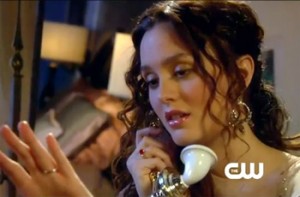 Hm, so I’m happy that Blair and Louis are engaged, but that was kind of soured by the events with Chuck that preceded it.
I’m actually kind of shocked by this episode – and not in a good way. Normally the characters do bad but ultimately forgivable things, but Chuck has really screwed up this time.
And it’s awful on the part of the writers that they’re willing to sacrifice all of the character development they’ve done over the course of the show with Chuck, and all for one OMG moment.
Whilst I don’t doubt they’ll try to salvage it, I for one am not convinced I’ll ever see Chuck the same way, or even in a favourable way, again.
But what worries me most, is al the interviews the writer's have done saying that Chuck and Blair were are end game. If they still end up together after this, even if Chuck has tried to redeem himself in between - what message is that sending out to the viewers? That's it ok to settle for a guy who gets abusive when he's been drinking and doesn't like what you're saying? That this is the fairytale that girls have to look forward to?

And on that note, I’m not even sure after this series has finished that I want to continue watching the show.
We’ll see how they try and fix this.


I also highly recommend checking out Carina MacKenzie's article on Chuck's behaviour in this episode - I think she captures perfectly what I felt and thought about this episode.
http://blog.zap2it.com/frominsidethebox/2011/05/gossip-girl-is-chuck-bass-abusive-ep-says-no-we-beg-to-differ.html
Thoughts? Comments? Are you still holding on to Chuck being a good person, or have you renounced him for Louis?
Posted by Rosy at 18:42