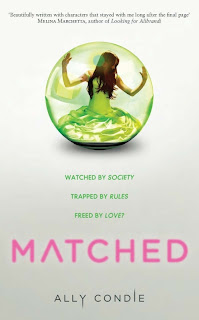 On her seventeenth birthday, Cassia meets her Match. Society dictates he is her perfect partner for life. Except he’s not. In Cassia’s society, Officials decide who people love. How many children they have. Where they work. When they die. But, as Cassia finds herself falling in love with another boy, she is determined to make some choices of her own. And that’s when her whole world begins to unravel . . .
I’ll admit now and get it out of the way for future posts – I am a complete cover judger. If a book has a lame cover, I just can’t get past it, which is tragic, but luckily for me there are a lot of truly awesome cover designers out there right now. So it was the cover that made me pick up Matched. Having passed the cover test, I go straight to reading the first page, in which she’s talking about angels, riding a train in the air and wearing a gorgeous green silk dress. Oh and have I mentioned she’s on her way to meet the man she’ll marry? And she doesn't get any say in it, she’s matched on data alone and told who to love. I'm sold.
I will also admit now, that whilst the idea intrigued me and the writing was good, I didn’t really get hooked into the book until about half way through. I can’t pin point the exact place, but around the half way mark there is an almost imperceptible shift in Ally Condie’s writing style and it goes from very short sharp sentences where the heroine, Cassia, perceives the world around her in data blocks to be analysed, to a lyricism that made me want to cry it was so beautiful.
“When I open my eyes, as I put my hand up to the place on my cheek where his lips touched, I say, ‘I didn’t give you anything on your birthday, I don’t even know when it is.’ And he says, ‘Don’t worry about that,’ and I say, ‘What can I do?’ and he answers, ‘Let me believe in this, all of this, and you believe it too.’ And I do. For one entire day I let his kiss burn on my cheek and into my blood, and I don’t push the memory away.”
But I’m getting ahead of myself. Cassia is trapped in a world of rules, where Officials decide everything, monitor everything, and keep everyone and everything under control. After her match banquet, where Cassia is told who she will marry when she turns 21, a supposed error with the data card make her start thinking about the possibilities outside of the world and rules she has been given. But the further in she gets, the worse the consequences get, and the worst thing is that no-one stands up against those in charge, and says that this is wrong.

Normally books like this really irritate me. Cassia is a good girl who does exactly what she’s told and never breaks the rules, and normally, when a character follows so blindly all the bad things that are happening, and never stands up and rebels, it frustrates me. A lot.

But Condie makes you really feel for Cassia, instead of the usual irritation, I understood that she genuinely doesn’t know any other way to behave, has no idea what the hell she is doing, and is just trying to stumble along and not hurt anyone or make any mistakes along the way – and I think everyone can relate to that on some level.

Her voice is clear, and whilst it didn’t strike me into a frenzy of awesome from page one, it crept up on me so by the time I reached the end, I was desperate for the next book. Because yes, like most books at the moment this is the first of a series, and you have to wait until sometime next year for the next book “Crossed”  but I’m pretty certain that if Condie continues with the fabulous stride she’d reached by the end of “Matched” it’ll be well worth the wait.
Posted by Rosy at 00:06