Review: From Notting Hill with Love... Actually by Ali McNamara

So my Mum and I have a tradition every Christmas, that it is the only time I am allowed to give her books. She’s like me in that she reads them ridiculously quickly, only she has no will power so she won’t do anything like eat, or sleep, or entertain me, until she’s finished. Christmas is the one time I can break this rule and slip a chick lit into her stocking, but part of the fun is that I have to proof it first to make sure it is the sort of book she’d like.
So I just finished reading “From Notting Hill with Love… Actually” by Ali McNamara and oh good lord that may have been the best chick lit I have EVER READ. 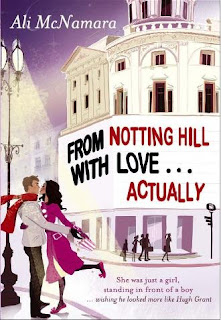 She was just a girl, standing in front of a boy ...wishing he looked more like Hugh Grant. Scarlett loves the movies. But does she love sensible fiance David just as much? With a big white wedding on the horizon, Scarlett really should have decided by now ...When she has the chance to house-sit in Notting Hill - the setting of one of her favourite movies - Scarlett jumps at the chance. But living life like a movie is trickier than it seems, especially when her new neighbour Sean is so irritating. And so irritatingly handsome, too. Scarlett soon finds herself starring in a romantic comedy of her very own: but who will end up as the leading man?
Scarlett is, as you have gathered, a little bit obsessed with the movies. She is constantly slipping into daydreams and fantasies that get her into no end of trouble with… well pretty much everyone who knows her. She’s engaged to be married to an awful guy called David, and the relationship is painfully realistic as most girls when reading this, will probably recognise their own bad relationship experiences in there. It’s horribly obvious how little David really knows, understand and appreciates her, so it’s little wonder that when she’s offered an opportunity to house sit in Notting Hill for a month, she leaps for it. After all it is one of her favourite films.
The scene is set, new place, new irritating guy who makes her stomach do an acrobatic routine, and one crazy quest to prove that she isn't wasting her life in a daydream. From Notting Hill follows all the set patterns of a chick lit, one of the reasons I love it so much – I love coming home to a safe book that will follow all the usual things, but do them in a fresh and fabulous way. You’ve got the conflict between finance and gorgeous man next door, the twist where it all goes horribly wrong, and the happily ever after. With a healthy dose of witty banter and more chick flick references than you can take.
I think this is one of the reasons I loved it so much – I’ve watched almost all of the films referenced, I’ve wished I was in them living out those romances, so I could immediately connect with Scarlett and that made the book a lot easier to love.
This has shot straight to the top of my favourite chick lit list. It’s funny, moving, fast paced and pulls you straight in and doesn’t let go. I read it in one night, much to my boyfriends amusement as he snored beside me. My only frustration? That this is Ali’s first novel, because after I finished I wanted to buy everything she’d ever written and read it all right then and there. But the benefit of this? If this is her debut novel, I literally cannot wait for the next ones she writes. In fact, I’m just going to wait and see what my Mum makes of it, and buy myself a copy to read repeatedly in the meantime.
Posted by Rosy at 23:47