Review: Fans of the Impossible Life by Kate Scelsa 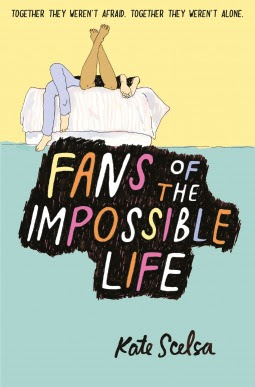 This is the story of a girl, her gay best friend, and the boy in love with both of them.
Ten months after her recurring depression landed her in the hospital, Mira is starting over as a new student at Saint Francis Prep. She promised her parents she would at least try to act like a normal, functioning human this time around, not a girl who sometimes can’t get out of bed for days on end, who only feels awake when she’s with Sebby.
Jeremy is the painfully shy art nerd at Saint Francis who’s been in self-imposed isolation after an incident that ruined his last year of school. When he sees Sebby for the first time across the school lawn it’s as if he’s been expecting this blond, lanky boy with a mischievous glint in his eye.
Sebby, Mira’s gay best friend, is a boy who seems to carry sunlight around with him like a backlit halo. Even as life in his foster home starts to take its toll, Sebby and Mira together craft a world of magic rituals and secret road trips, designed to fix the broken parts of their lives.
As Jeremy finds himself drawn into Sebby and Mira’s world, he begins to understand the secrets that they hide in order to protect themselves, to keep each other safe from those who don’t understand their quest to live for the impossible.
A captivating and profound debut novel, "Fans of the Impossible Life" is a story about complicated love and the friendships that change you forever. 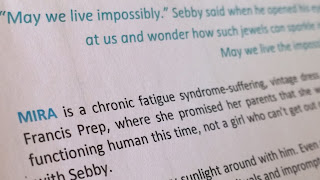 When I was told about the book, the first thing that leaped out at me was the line in the picture – ‘Mira is a chronic fatigue syndrome suffering, vintage dress enthusiast’ and I wanted to read it based on that and the tag line. That was enough for me, because I have CFS and I have never seen a character in a YA book who has CFS too. Wanting diverse fiction is not just about sexuality and skin colour, it is about all the other things that make us unique individuals. I want to find someone, just one someone, in a book who I can look at and feel like they understand.

So I was insanely excited to read it, and then I did and was grossly disappointed, because Mira doesn’t have CFS, she has depression. Two wildly different things. Now that isn’t the author’s fault, that’s on the marketing department for pitching this as something that it wasn’t, but it broke my heart. Finally, I thought, I had found a book that would look at how crippling and little known CFS is, and how a YA character deals with life whilst also dealing with CFS, and it was all a lie. I don’t think I can even adequately put into words how upset I was about this. Yes fatigue and exhaustion are a part of depression, and no I'm not suggesting if you have depression you can't have CFS or vice versa, but if Mira does have CFS it isn't examined or even mentioned at all, the only things we learn about her are that she loves vintage clothes and she suffers from crippling depression.

I didn’t connect with any of the characters. I wanted to, I felt for them and their impossible situations, but I didn’t really care. I had to keep pushing myself to keep reading, to find out how this would end. And then the end came and left me feeling thoroughly unsatisfied. This may have been due in part to the strange choice in writing style. Each character is written differently, and whilst Mira and Jeremy's both kinda work, Sebby's really doesn't. Every time we had a section from Sebby I was jolted back out of the story and left floundering to try and reconnect.

I should have loved everything about this book. It tackled sexuality, depression, isolation and bullying. It had a love triangle that was such a breath of fresh air that I wanted to cheer. But despite all of this it never really got under my skin. Like I said, I didn’t connect with the characters, I didn’t care what happened to them. I found myself becoming increasingly depressed reading the book and was left at the end feeling like what was the point. There was no satisfaction, no real sense of hope, of a journey completed. I was left feeling a similar feeling to the one when I finished ‘Eleanor and Park’ by Rainbow Rowell.
They all seem to end in roughly the same place as they began, which led me to wonder what precisely the point of the story had been. They didn't seem to really grow or develop at all. I also really struggled with how some of the issues were tackled. For example when a situation occurs and various characters decide to finally speak up and go to the authorities, it is treated later as though this was a bad idea, as though they should have stayed quiet. So many of the big themes and issues that the book looks at the start like it might tackle, are just swept under the rug in favour of the trios slightly unhealthy relationship. Plus, if from that tag line you're expecting an interesting and insightful bisexual/threesome relationship, you've come to the wrong book. At no point is the idea of bisexuality even mentioned and there are some decidedly worrying scenes between the trio where consent is more than a little iffy.

The only characters that I found truly fascinating were the adults. Mira’s response to her depression was achingly realistic and heart-breaking and it was good to see such a response portrayed in fiction. I also really loved the diversity in the families. We see a biracial family, a foster family and a family with two parents of the same sex. No one can fault 'Fans of the Impossible Life' for its inclusion and desire to tackle lots of diverse branches of life, it simply doesn't handle them very well once they've been introduced. And don't even get me started on how the teacher/student relationships are handled in this. So many potentially awesome things just ended up as a hot mess once I'd finished and begun to think back through the book.
Other than that it was just a lot of different people who never really stood out for me. They were all shown as these blindingly unique and ‘WILL NOT BE LABELED’ characters, but they never felt truly real or human.

I think I will probably be in the minority for this one, because there is a lot to love about this book and I’m looking forward to seeing other people’s responses when reading it. However for me it just wasn’t quite what I had hoped for. It started with a falsehood and went downhill from there.