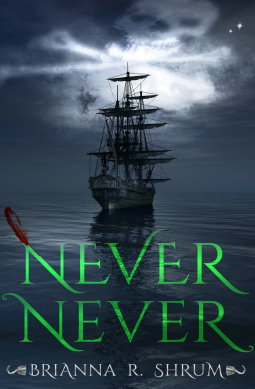 James Hook is a child who only wants to grow up.
When he meets Peter Pan, a boy who loves to pretend and is intent on never becoming a man, James decides he could try being a child—at least briefly. James joins Peter Pan on a holiday to Neverland, a place of adventure created by children’s dreams, but Neverland is not for the faint of heart. Soon James finds himself longing for home, determined that he is destined to be a man. But Peter refuses to take him back, leaving James trapped in a world just beyond the one he loves. A world where children are to never grow up.
But grow up he does.
And thus begins the epic adventure of a Lost Boy and a Pirate.
This story isn’t about Peter Pan; it’s about the boy whose life he stole. It’s about a man in a world that hates men. It’s about the feared Captain James Hook and his passionate quest to kill the Pan, an impossible feat in a magical land where everyone loves Peter Pan.
Except one.

You know when you emerge from the final page of a book and feel like you’ve just wasted your time? Yeah, that.

I love stories told from the villain’s perspective. Done right they can offer a nuanced character that always has more to them than the black and white evil/good character stereotypes, and they can often result in some of my favourite stories. Done wrong and sadly, you end up with something like this.
The story telling style is very reminiscent of Barrie’s original Peter Pan story – points for continuity – but sadly it just doesn’t fit with the actual story being told. The result is everything being told to the reader, never shown anything. You’re told that Pan is bad, that Hook is upset, that the world is a terrible place. You just never really see it and as a result that’s the first thing that disconnects the reader.

The second thing is the character’s, who never really feel like real functioning people. Yeah sure I could see Pan was bad, I felt for Hook being in this terrible situation, but I didn’t care. It comes back to the issue of telling the reader everything instead of showing them and allowing them to spend time connecting to the characters. It also doesn’t help that all of them are one note characters with no real depth to them. Pan is always awful, Hook is always betrayed and angry. There’s no depth no nuance, and as a result no real feeling,

Then you have the plot, which is virtually non-existent. The first section of the novel is taken up with James prior to Neverland and then going to Neverland and discovering he can’t leave. Then there is a whole host of nothing for the majority of the novel. There are a couple of standoffs between Pan and Hook, there’s a lot of Hook being abominable to everyone and sulking in his cabin, and then suddenly in the last 20% of the novel Wendy and her brothers arrive and we have a very condensed version of the original Peter Pan story smushed into that last section. There is no real drive to the story, I frequently found myself skim reading and skipping through the story because there was so much that was completely unnecessary.

It also doesn’t help that it can’t really decide what sort of book it wants to be and who it’s aimed at. To start with James is twelve and it has a distinct MG feel. Then he starts growing up until we reach some decidedly adult scenes where he’s discovering some of the delights of being a pirate captain which really wouldn’t be appropriate for a younger reader – it’s like it can’t work out quite who should be reading it. The relationships depicted are more than a little unhealthy, and I was actually horrified reading some of the scenes that are meant to be romantic.

There was so much potential for a really nuanced look at Hook, at this boy who grows up but not at a normal pace and in a normal environment. In fact with some of the descriptions of how quickly he ages it could have been a fascinating look at a fifteen year old boy trapped in a body of an adult with the mentality still of a child.

It’s so bleak. I like my stories with a little bit of hope and there was nothing in this. I finished the book, looked at the last page a few more times and honestly wondered why I’d just wasted my time on this. It was depressing and frustrating and I didn’t connect with anyone.

The only reasons that this was not a one star read is that the writing was quite good in places, plus the inclusion of so many little details from the original story and the versions since then was a really great touch. Those are the only things that kept me reading, otherwise I would have DNF this one at around a third of the way through.