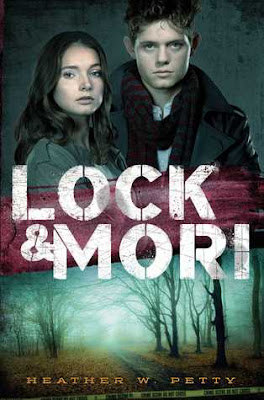 In modern-day London, two brilliant high school students, one Sherlock Holmes and a Miss James "Mori" Moriarty, meet. A murder will bring them together. The truth very well might drive them apart.
Before they were mortal enemies, they were much more.
FACT: Someone has been murdered in London's Regent's Park. The police have no leads.
FACT: Miss James "Mori"Moriarty and Sherlock "Lock" Holmes should be hitting the books on a school night. Instead, they are out crashing a crime scene.
FACT: Lock has challenged Mori to solve the case before he does. Challenge accepted.
FACT: Despite agreeing to Lock's one rule--they must share every clue with each other--Mori is keeping secrets.
OBSERVATION: Sometimes you can't trust the people closest to you with matters of the heart. And after this case, Mori may never trust Lock again.

This book nearly sent me into a rage spiral that would have sent my kindle flying across the room, except a) there were one or two redeeming features (although sadly not as many as I would have liked) and b) my kindle is new.

I’ve always been a little wary of Sherlock Holmes retellings – I love the books, I love the movies I love the shows, but as soon as you start sticking my beloved characters into strange and slightly side eye worthy situations I get nervous. Then earlier this year I read ‘Every Breath’ by Ellie Marney and it was so GLORIOUSLY GOOD that I thought maybe I had been too hasty to judge. After all here was a modern day re-telling that involved teenage James Mycroft and Rachel Watts and it was so good I shrieked loudly and often at everyone over the days following reading it. So after that brilliance I found I had renewed interest in the forthcoming ‘Lock and Mori’ which featured a teenage Sherlock and Moriarty with a modern setting and a gender twisted Moriarty – colour me intrigued.

Sadly though, it really didn’t live up to those expectations. As with several books I’ve read recently the only thing that stopped this being a one star read was that the writing was not bad, in fact in places it was quite good – it’s just a shame about everything else.

Sherlock does not actually feel like the Sherlock we have come to know through the original stories, in fact the only things he shares are a name, a brother called Mycroft and a slight tendency towards the genius. Which we see in precisely one scene at the start of the book and then it’s dropped in favour of INSTALOVE.

I could possibly forgive the Sherlock character destruction (I’m lying, I totally couldn’t) if Mori had been an interesting and compelling character. Sadly I was disappointed yet again. She’s not a particularly nice person, very selfish to the detriment of others, and for me she really didn’t work at all. Sure she’s intelligent, but she’s aloof, cold, not particularly likeable even to the reader and her reasoning behind a lot of the decisions she makes in the book seemed bizarre at best. Sherlock’s fascination with her I could understand – after all she’s definitely intelligent, but instalove? Really? The big reason at the end for why Mori will never trust Sherlock again left me feeling decidedly non-plussed.
Any sort of logic or reasoning she may have been in possession of disappears at around the half way mark where solving murders is tossed away in favour of make out sessions, and justice and safety for not just herself but her three younger brothers is tossed aside for decidedly tenuous reasons. Add in the fact that she's an English girl referring to her Mum as 'Mom' and I was about ready to give up.

Then there’s the pacing. We discover who the murderer is at the half way point and I reached that reveal, checked to see how much more of the book was left and genuinely didn’t know how the second half could possibly be filled. Short answer? Badly. It plays on all the tired clichés – look how stupid the adults are, we teenagers will solve everything and save the day! being the most frustrating to witness. Chuck in the instalove and I was ready to weep at the assassination of these characters. I’m all for playing with well-loved characters, twisting the scenarios to see how they work with different players and variables, but sadly in this case it really didn’t work.


If you’re after a good modern day Sherlock story then I cannot recommend ‘The Every trilogy’ by Ellie Marney enough. If you’re a fan of Sherlock, of the original stories, of interesting believable characters and well built up romance then sadly ‘Lock and Mori’ won’t be the book for you. It’s a great concept that could have been brilliant, but sadly is left to founder in bad pacing, terrible characters and an unbelievable plot.