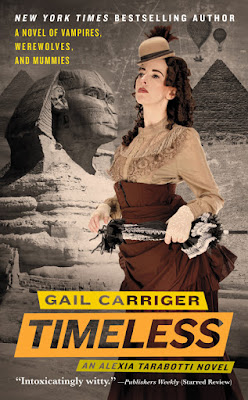 Alexia Tarabotti, Lady Maccon, has settled into domestic bliss. Of course, being Alexia, such bliss involves integrating werewolves into London High society, living in a vampire's second best closet, and coping with a precocious toddler who is prone to turning supernatural willy-nilly. Even Ivy Tunstell's acting troupe's latest play, disastrous to say the least, cannot put a damper on Alexia's enjoyment of her new London lifestyle.
Until, that is, she receives a summons from Alexandria that cannot be ignored. With husband, child, and Tunstells in tow, Alexia boards a steamer to cross the Mediterranean. But Egypt may hold more mysteries than even the indomitable Lady Maccon can handle. What does the vampire Queen of the Alexandria Hive really want from her? Why is the God-Breaker Plague suddenly expanding? And how has Ivy Tunstell suddenly become the most popular actress in all the British Empire?

Ah me, if someone were to ask me what my favourite steampunk series in the world is, I would have to answer ‘The Parasol Protectorate’ Series by Gail Carriger. This series is by far one of the most imaginative, wittiest and fantastically written that I have ever had the pleasure to read, so it was with equal parts excitement and sadness that I approached this, the final book in the series.

And it was fantastic. Completely and utterly fabulous. It had all of the elements that I have come to love in Carriger’s series, and more besides. Her writing remains fantastic, equal parts witty splendour and elegant prose. The characters we have come to know and love were all back in abundance, and I particularly liked getting to know Biffy better. He has been one of the most intriguing characters from the start, and I have loved watching his arc, so to see him come all the way round to this was fantastic. I was sad not to see more of Lord Akeldama, but la, we cannot have everything, and what parts he was in he was his usual fabulous self.

It was a novel of tying up all the loose ends, of bringing all the intrigue and mystery to a head and finding out just what her terrible Italian father had been up to. The novel skips on a few years from the birth of the Infant Inconvenience, and we get to see Prudence as a toddler, just learning the word ‘No’ and how Lord Akeldama is taking to fatherhood. With aplomb, it has to be said. It was fantastic after the last two books build up to finally see Prudence in action, and it was fabulous to get some answers to some very intriguing questions after all this time. This is most definitely a series that I will go back to and read again to make all the little pieces slot into place – and then again just for the fun of it.

All in all this was a brilliant finale to an utterly fabulous series. I don’t want to go into too much detail for fear of ruining it for those of you who haven’t yet read it. But I assure you, this is a truly fantastic series and this book is the perfect end to it. We get answers and questions, character development and dirigible rides. Supernatural creatures, beautiful romance, and above all Ivy Tunstall and her husband’s new play, which was truly epic… But the most fantastic of all? We get to see Alexia and her ever doting husband as they grow together, fight together, and have a fantastic final escapade together.

Carriger’s writing is fantastic, her imagination even more so, and this series will be going into the immortal ‘all time favourites’ shelf in my room.

You can read an interview with the lovely lady herself here!