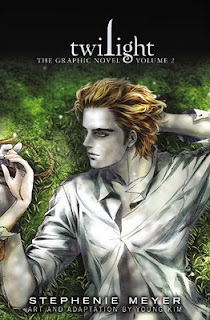 Having uncovered the dark secret of her enigmatic classmate, Edward Cullen, Bella Swan embraces her feelings for him, trusting Edward to keep her safe despite the risks. When a rival clan of vampires makes its way into Forks, though, the danger to Bella has never been more real. Will she make the ultimate sacrifice to protect the people dearest to her?
The second volume of Twilight: The Graphic Novel completes the visual adaptation of Stephenie Meyer's worldwide bestselling debut novel and is a must-have for any collector's library.

I really loved the Twilight books when they first came out – this was back before they got big. They were a beautiful form of escapism whilst my Grandmother was dying, and so they’ve always stayed on my shelf as a chicken soup when I’m feeling pants.

Then the films came out and I lost interest, I really dislike the films – pretty much everything about them, although I will admit that they do seem to get better slightly the further into the series we get. Anyway, the films kind of ruined the series for me. But then the graphic novel came along, and I was tempted to leave it and not bother, but then I saw a couple of examples of the artwork and I was hooked. I mean Young Kim’s drawings are stunning.

With the book split into two, there was a long wait for this volume to come out, but now here it is (finally) and the second half of the book has finally been taken into Young Kim’s talented hands.

The reason I love these books so much is partly because the artwork is so incredibly beautiful, but also because she hasn’t been influenced by the film franchise at all. Gone are Pattinson and Stewart’s wooden portrayals – instead we have Bella and Edward exactly as I imagined them. The detail is incredible, the drawings stunning, and it brought the story to life again for me. I was faced once again with all the things I loved about the series originally without the films dragging it down.

The graphic novel stays very true to the original book, so little things that are forgotten in the films are brought back in and is so good to see the complete story here.

Whether you are a fan of the books or the films or both, or maybe if you’re not really a fan of the series at all, I still recommend trying the graphic novels. The artwork brings the story to life, the writing is stripped right down to the basics, and it’s a beautiful format to explore the story in.