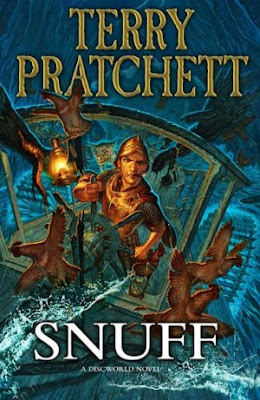 According to the writer of the best-selling crime novel ever to have been published in the city of Ankh-Morpork, it is a truth universally acknowledged that a policeman taking a holiday would barely have had time to open his suitcase before he finds his first corpse.
And Commander Sam Vimes of the Ankh-Morpork City Watch is on holiday in the pleasant and innocent countryside, but not for him a mere body in the wardrobe. There are many, many bodies and an ancient crime more terrible than murder.
He is out of his jurisdiction, out of his depth, out of bacon sandwiches, and occasionally snookered and out of his mind, but never out of guile. Where there is a crime there must be a finding, there must be a chase and there must be a punishment.
They say that in the end all sins are forgiven.
But not quite all...

“Where there's policeman there's crime, sergeant, remember that.”
“Yes I do sir, although I think it sounds better with a little re-ordering of the words...”
So Sir Terry Pratchett’s latest Discworld novel hits bookstores today, and I was lucky enough to receive an advance copy of it to review.

Where shall I start? It is classic Pratchett, with all of the fabulous wry humour and characters we know and love. In this particular instance Sam Vimes is back to the foreground and chaffing against the bonds of ‘relaxation’ and ‘holiday’ and you just know that where Vimes goes, trouble will invariably be there to welcome him with a banner and parade. And in usual Vimsey style is not going to go down the route of time off without a fight.

“Commander Vimes's badge Sir, as delivered to me by Captain Carrot.”
“Sealed?”
“Yes, sir.”
“Then it doesn't have Vimes's badge in it.”
“No sir, a careful examination of the envelope suggests it contains an empty tin of double thunder snuff...”

In this case the holiday involves finally going to the countryside to see Lady Sybil’s family estate, which involves plenty of opportunities for Vimes to be thoroughly grumpy about country ways, the lack of streets for a copper to walk, and to also drag it (kicking and screaming) to keep up with Ankh-Morpork.

“It's customary to give Mr Coffin a penny. In the old days my father kept a little charcoal brazier in the coach, you know, in theory to keep warm but mostly to heat up pennies before picking them up in some tongs and tossing them out for the gatekeeper to catch. Apparently everyone enjoyed it, or so my grandfather said, but we don't do that anymore.”

Vimes has gotten older, has has Young Sam since we last saw him in ‘Thud’ with ‘Where’s my Cow?’ every evening like clockwork. He’s now progressed to reading to Vimes, and books invariably filled with poo and other bodily functions. It was great to see him grow up, see how Vimes is coping with juggling work and family, and to see what sort of person this baby is turning into.

The Vimes’s would not be complete without Sybil, who I personally hero worship. She’s strong and feisty and absolutely fabulous. Who else would keep Vimes in line and eating salad? Salad?...

“You would have found that she has at her command a considerable amount of weaponry and, knowing the temper of the Ramkins, she would have quite probably done things to you that would make Wilikins say ‘Whoa that’s going a bit too far.’”

And let’s not forget Wilikins, who I hadn’t really gotten a feel for in previous books (bearing in mind that I only became acquainted with Sam Vimes in ‘Nightwatch’ and I know I have some history to catch up on at the earliest possible moment. So Wilikins, didn’t know much about him, but he seemed quite cool, and handy in a tight spot. He completely owned it in this book, I love him. Can I be team Wilikins and Sybil? Because between them I think they could take over the world.

So yes, we have old characters, we have new characters, all explored and introduced with the brilliant skill we’ve come to expect from Pratchett.
And we have plot which you know is going to be awesome – how could it not be? And innuendos and pithy lines galore.

“Well dear, it is a truth universally acknowledged that a man with a lot of wood must be in want of a wife who can handle a great big – ”
Lady Sybil interrupted sharply: “Sam Vimes, I believe that you intend to make an indelicate remark?”
“I think you got there before me,” said Vimes, grinning. “You generally do dear, admit it.”

My only complaint is that the first third to half of any Pratchett book I read is good, funny, very well written, but it doesn’t grab me. I don’t have that urgent need to pick up the book and keep reading. As a result it can sometimes take me a while to get going, whereas normally I’d be done with a book in a matter of days.

However, there is always a point where things really kick off, and I get this rush of adrenaline and a feeling of ‘yes, this is it, here we go!’ and from that point I can’t stop, it’s fabulous, and it’s got me, and by hell I want more. I want to finish this one and go away and read all the other Discworld books now, at once, altogether please.So whilst there is nothing wrong with anything in the first half, it did take me a while to really feel invested in the story.

We also have Pratchetts fabulous satire of the world part 39. I’m really pleased to see that the themes explored in this book were a lot darker. They’ve been getting darker as the series has progressed, and it’s really exciting to see where he takes the character’s. After all with this many books in the series, it seems hard to keep the momentum going, but this book is just as strong as some of his earlier ones. He blends humour and day to day activity, with high terror, thrills and excitement, as well as a healthy dose of philosophy,
“Do not seek perfection. None exists. All we can do is strive.”

exquisite writing Vimes also indulged in a rare cigar because, well, what good is a snooker room without smoke twisting among the lights and turning the air a desolate blue, the colour of dead hopes and lost chances?

and a long hard look at the world around us.
“Of course we went on trying, because that’s the military way!”
“You mean, pile dreadful failure on top of failure?” said Vimes.

It’s magical and fun and an absolute must for all Pratchett fans. Sam Vimes is a personal favourite of mine, and I love any chance to go and see what he’s getting up to next – I just hope we get to find out what happens after.

“How went your holidays, apart from lawless actions, ad hoc activities, fights, chases on both land and sea and indeed freshwater, unauthorized expenditure, and, of course, farting in the halls of the mighty?”
Vimes’s gaze was steady and just above the Patrician’s eye line.
“Point of detail my lord: didn’t fart, may have picked nose inadvertently.”