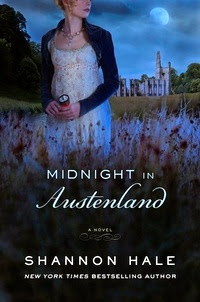 Released: 31st January 2012 (from Amazon)
Spoilers? Nothing you wouldn't read in the blurb.
When Charlotte Kinder treats herself to a two-week vacation at Austenland, she happily leaves behind her ex-husband and his delightful new wife, her ever-grateful children, and all the rest of her real life in America. She dons a bonnet and stays at a country manor house that provides an immersive Austen experience, complete with gentleman actors who cater to the guests' Austen fantasies.
Everyone at Pembrook Park is playing a role, but increasingly, Charlotte isn't sure where roles end and reality begins. And as the parlour games turn a little bit menacing, she finds she needs more than a good corset to keep herself safe. Is the brooding Mr. Mallery as sinister as he seems? What is Miss Gardenside's mysterious ailment? Was that an actual dead body in the secret attic room? And-perhaps of the most lasting importance-could the stirrings in Charlotte's heart be a sign of real-life love?
The follow-up to reader favourite Austenland provides the same perfectly plotted pleasures, with a feisty new heroine, plenty of fresh and frightening twists, and the possibility of a romance that might just go beyond the proper bounds of Austen's world. How could it not turn out right in the end?
“It is a universal truth that nothing spoils a post lunch game of croquet like suspecting the other players of murder.”

I read and reviewed Shannon Hale’s ‘Austenland’ in August and I loved it – it was funny, smart and such a brilliantly fresh twist on Austen.
The first book focused on the idea, on the romance of the situation and the concept of living in Jane Austen’s world for two weeks. It was really good, but there wasn’t a vast amount of action, so some bits dragged a little bit.

However, ‘Midnight in Austenland’ gave Hale another chance to take all the good bits and make them even better. Instead of ‘Pride and Prejudice’ we plunge with Charlotte into a story closer to ‘Northanger Abbey’ – as a result there’s a lot more action, things happening and bumps in the night enough to scare me silly.

It’s a lot tighter and a lot funnier (which is impressive considering I was laughing out loud most of the way through ‘Austenland’.) It feels like having explored the ideas in the first book, Hale has just snuggled right back into the world and thoroughly enjoyed herself. There is so much more detail, because instead of introducing all these fresh concepts, it’s something that we already know and love.

There was less of a focus on the love aspect – although it was still there. It was more about Charlotte; her re-building her self-esteem and self-worth, and the mysteries surrounding Pembroke Park. I warmed to Charlotte straight away, she was strong and feisty and unbelievably funny.

“”Oh, I meant ‘drawers’ as in the things you open, not like underwear, because clean and tidy underwear is a passion of mine!” Really, Charlotte? She thought. Is it really? Is that a statement you want defining you?”

Charlotte has an almost constant conversation with her Inner Thoughts – to the point that they practically took on a life of their own, and I really loved seeing these conversations. It gave a greater insight into her character, and provided a vast array of humour.

Her inner thoughts shut up after that, probably too distracted by Mr Mallery’s manliness to taunt her anymore.

Pipe down brain, Charlotte commanded. I blame mystery novels for your bad manners.

She was just so instantly likeable, nice Charlotte, who you just wanted to hug for making it through all the bad things and coming out as feisty, strong Charlotte. At the start of each chapter we got insights into events that had shaped her into the person she was – right back to childhood and then closer with the divorce from her husband. It was so empowering to watch her reclaim her life and her spirit, and I wanted to cheer her though.

And the host of secondary characters were a lot stronger this time. It was really good to see some people we already know from the first book, and also to have some acknowledgement of the events in the first book and their consequences.

It was great to see Miss Charming back again, and for some reason I preferred her this time, I really wasn’t fussed on her in ‘Austenland’ but she came alive this time and I felt a lot more compassion towards her as we found out more of her backstory. And the boys… I adore Eddie, he was absolutely brilliant and a fabulous side kick in all of Charlotte’s sleuthing.

“Disapproving?  Of my sister? Impossible. If that were true, I should give him a most stern and scolding sort of look that would cause quakings and shakings of fear.” Eddie previewed his stern and scolding look, and she nodded emphatically to show she was impressed.

He was absolutely fabulous, and I wanted more of him.
It was also nice to see a new dark and forbidding man in the shape of Mr Mallery, who has got glares and brooding scowls down pat. He was an intriguing man, with a lot more depth than I would have expected. Actually that’s true of all the characters, we got a lot more of them instead of one or two sides that were showcased in ‘Austenland’ – the whole thing was just so much better. And that’s impressed, because you can see from my thoughts of ‘Austenland’ that I was blown away by how brilliant I thought it was.

Mr Mallery at the reins of a light, two-wheeled open contraption that Ms. Austen might have called a “phaeton”, but which Charlotte was tempted to call a “chariot” because it reminded her of the chariot races in the movie Ben Hur. Except there was a seat. And not lethal blades swirling in the wheel hubs. At least, not noticeably.

“That is wonderful.” He leaned his head back to look at the sky. “Allow me to absorb the wonderfulness of that for a moment. Yes, that will do.”