I probably would have gotten in to “Misfits” at some point, but as it was I had season one thrown at me long before it was advertised – best friend’s sister worked on costume for the first season one, so I was hyped about it way before I even saw the trailers. 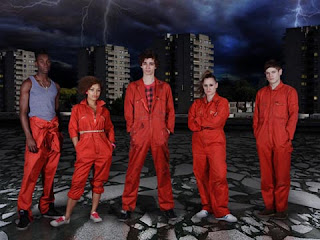 I loved it – it was funny, slightly disturbing, slick, and the cast were genius. Stereotypes, but it worked for what they were going for. I love the British way of keeping programmes like this short and sweet, with only six episodes for a season instead of the American twenty odd – it kept it fresh and held the momentum throughout without any need for hiatuses or dodgy episodes where the quality slips a few notches.
No Misfits was genius and I raved about it. Unfortunately no one listened to me, as I was raving about The Vampire Diaries at the same time (we’ll get to that later) so most people assumed I just had bad taste all round and ignored my cries of genius.
However, just before Season Two kicked off, I finally got Boy to watch season one with me, and proved my point. So after nearly a year of desperately waiting for season two, I was all hyped up off the first season again and launched straight in to it.
SPOILERS FOR SEASONS ONE AND TWO CONTAINED BELOW
You have been warned.
So I wasn’t sure when season two started. Oh sure it was brilliant, I still loved it, and I was clutching Boy’s leg and a pillow for most of it and shrieking about how the tension was too much and I couldn’t take it! Truth was that I was a little bit worried. Season one had been so good, and I was terrified that this was going to be another Heroes debacle where it all went downhill from there. I’d heard some disturbing rumours, and I didn’t want to remember it as that show that could have been brilliant and lost it. So whilst my nerves were shot to pieces after the season opener, I was cautiously optimistic.
And then I saw the second episode. Don’t get me wrong, it was still solid, but that nagging worry at the back of my head started to whimper – don’t introduce too many new people! Focus on the genius you’ve got! Please don’t do this!
It just didn’t thrill me, so I wasn’t all that fussed on watching episode three, for fear of watching it slip into mediocrity. Which is why I come to be reviewing this episode five days after it aired. I caught a clip of episode three on the tv, and my jaw dropped.
Firstly, I knew it! I had theories about the masked man in black being Simon. I had no idea how or why, but I was convinced it was him. I get points for awesomeness.
Secondly, Simon! Oh baby take your shirt off more often! I’ve had a soft spot for him right from the start, even though he was a little bit creepy and I was more than a little worried about the psychopath streak. But hey, he was cute and I like the underdog. But this, this was brilliant. Hats off to Iwan Rheon. I love the shift, you know exactly which Simon it is on screen – frightened, closed off Simon of the present who’s surprisingly insightful and usually shot down with a crude joke from Nathan; and future Simon, who is so confident in himself, so sure of every part of who he is and how he fits into all of this. The quiet conviction in his voice, and the slight smirk as he can finally see some of the humour in all of this. Oh and the muscles – seriously, more of the shirt off directors, we like this.
This episode has restored my faith completely, and I am desperate for the next one. It was nice to see Nathan take a minor back seat – again I love him but it felt like a lot of the focus had been on him with the reveal of his power at the end of season one and his return in season two. But the storyline he was given was hysterical. I did like this side plot with the tattooist, as it kept everyone else busy and was a nice play with other people with powers – but the real focus was definitely on the burgeoning relationship between Alisha and future Simon (with a little bit of present Simon thrown in just to confuse things.)
It was so good to see another side to Alisha, (Antonia Thomas) to see that she is vulnerable, and to have that explored a little bit. We’ve seen how she and Curtis manage a relationship with her power, but we’ve never seen any of the emotional effects of it on her (apart from briefly in season one.) Her shock and desperation at being touched in such a long time made me feel for her in a way I never have before – she was previously my least favourite character on the show, but now the writers have explored her character further, I’m starting to like her. She still had moments of bitchy spoilt brat ness, but we actually get to see her vulnerability, her desperation, and the walls she puts up to protect herself from the hurt of men treating her like a sex object.
I am officially on board with Simon/Alisha. In fact I’m more than on board – just give me more of the tender beautiful scenes between them (with that incredible music composed by Vince Pope.)
So yes I had my doubts, and I’ll still wait and see what happens in the next episode to see if they can keep it going – but I have faith now, not only will they keep it going, but I think this season has the potential to be even better than the first. Oh, and if you’re not on the Misfits bandwagon yet, get one, now, and I’ll convert you to The Vampire Diaries next…
Posted by Rosy at 03:28