Review: From Twinkle, With Love by Sandhya Menon 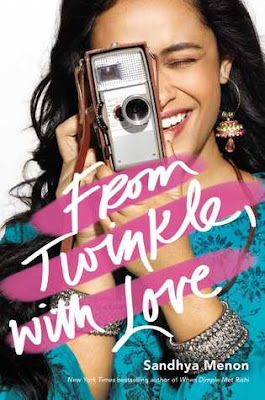 Aspiring filmmaker and wallflower Twinkle Mehra has stories she wants to tell and universes she wants to explore, if only the world would listen. So when fellow film geek Sahil Roy approaches her to direct a movie for the upcoming Summer Festival, Twinkle is all over it. The chance to publicly showcase her voice as a director? Dream come true. The fact that it gets her closer to her longtime crush, Neil Roy-a.k.a. Sahil's twin brother? Dream come true x 2.When mystery man N begins emailing her, Twinkle is sure it's Neil, finally ready to begin their happily-ever-after. The only slightly inconvenient problem is that, in the course of movie-making, she's fallen madly in love with the irresistibly adorkable Sahil.Twinkle soon realizes that resistance is futile: The romance she's got is not the one she's scripted. But will it be enough?Told through the letters Twinkle writes to her favorite female filmmakers, From Twinkle, with Love navigates big truths about friendship, family, and the unexpected places love can find you.

I absolutely adored "When Dimple met Rishi" and was so excited about reading this second novel from Menon, so it was perhaps those high expectations that left me feeling so disappointed and crushed after this book.

The biggest issue that I found was how unlikeable Twinkle was, and given that the entire book is told in her thoughts and feeling into her diary, that immediately becomes problematic.
Even though you only have access to how Twinkle perceives everything, it becomes really clear really early on, that not only is Twinkle incredibly self absorbed, but she's also kind of a jerk, which makes a lot of the other character's responses to her hard to believe. Take Sahil - she treats him appallingly, and sure she has to answer for that a bit at the end, but on the whole Sahil just brushes is off and continues to make heart eyes at Twinkle which doesn't make any sense given how she's behaving.

It's a nice enough plot, a cool idea, and I liked a lot of the supporting characters, but my dislike for Twinkle coloured my entire perception of the book and left me feeling mostly frustrated and grumpy when I finished.

If you've yet to read any of Menon's work, I highly recommend checking out Dimple instead.