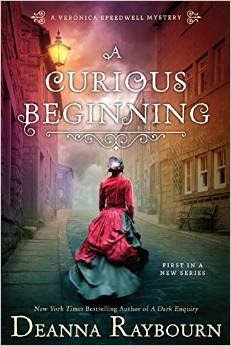 London, 1887. As the city prepares to celebrate Queen Victoria’s golden jubilee, Veronica Speedwell is marking a milestone of her own. After burying her spinster aunt, the orphaned Veronica is free to resume her world travels in pursuit of scientific inquiry—and the occasional romantic dalliance. As familiar with hunting butterflies as she is fending off admirers, Veronica wields her butterfly net and a sharpened hatpin with equal aplomb, and with her last connection to England now gone, she intends to embark upon the journey of a lifetime.
But fate has other plans, as Veronica discovers when she thwarts her own abduction with the help of an enigmatic German baron with ties to her mysterious past. Promising to reveal in time what he knows of the plot against her, the baron offers her temporary sanctuary in the care of his friend Stoker—a reclusive natural historian as intriguing as he is bad-tempered. But before the baron can deliver on his tantalizing vow to reveal the secrets he has concealed for decades, he is found murdered. Suddenly Veronica and Stoker are forced to go on the run from an elusive assailant, wary partners in search of the villainous truth.

I think it’s safe to say that Deanna just gets better with every book she writes (and considering how much I love her earlier novels this is saying something.) and the first Veronica Speedwell adventure is truly fantastic.
Whilst I loved the three book foray into the 1920s, ‘A Curious Beginning’ takes us back firmly to familiar Victorian territory.

Comparisons will obviously be made between this and Deanna’s previous books set in Victorian England, but the truth is they couldn’t be more different. ‘A Curious Beginning’ takes all the best bits of Lady Julia and adds to them to create a very different beast of a novel.

Veronica herself is much less of a quiet late bloomer. Strong, feisty, determined, this is a woman who has not been coddled and instead has grown up knowing exactly what she wants and how to get it. She’s independent and spirited and travels around the world catching butterflies (and gentlemen) – in short Veronica doesn’t need anyone to look after and protect her thank you very much. Plus she has the art of travelling light down, I want tips.
But she still ends up stuck with Stoker, a dark, brooding and decidedly grumpy gentleman with quite the past. Although she finds his attempts at kidnapping endearing rather than terrifying, an unlikely friendship is born.

Whilst there is a whodunit element to the story, there is so much more going on between the covers. There’s the mystery of Veronica herself and why people keep trying to kill her, the mystery of Stoker and his troubled and dark past, the whodunit of the murder, plus a stay in a travelling circus all thrown into the mix to make a truly enthralling story. It’s a mixture of so many things blended together seamlessly to create a truly satisfying whole.

Deanna’s writing is at its best, full of the evocative prose that really draws you into the story. Her characters are truly fascinating, with just enough intrigue and questions that herald a truly intriguing series to come.

This is a fantastic start to what is sure to be a glorious new series. Julia has competition in my heart for most awesome Victorian lady sleuther… Suffice to say I loved it. Once I started reading I could not stop. I loved this thrilling new world of Veronica and Stokers – an unlikely and truly fabulous pair, and I cannot wait to see what adventures the two of them get up to next.