Review: A School for Unusual Girls by Kathleen Baldwin 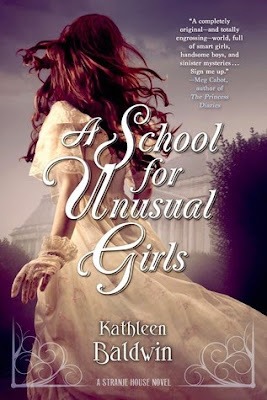 It’s 1814. Napoleon is exiled on Elba. Europe is in shambles. Britain is at war on four fronts. And Stranje House, a School for Unusual Girls, has become one of Regency England’s dark little secrets. The daughters of the beau monde who don't fit high society’s constrictive mold are banished to Stranje House to be reformed into marriageable young ladies. Or so their parents think. In truth, Headmistress Emma Stranje, the original unusual girl, has plans for the young ladies—plans that entangle the girls in the dangerous world of spies, diplomacy, and war.
After accidentally setting her father’s stables on fire while performing a scientific experiment, Miss Georgiana Fitzwilliam is sent to Stranje House. But Georgie has no intention of being turned into a simpering, pudding-headed, marriageable miss. She plans to escape as soon as possible—until she meets Lord Sebastian Wyatt. Thrust together in a desperate mission to invent a new invisible ink for the English war effort, Georgie and Sebastian must find a way to work together without losing their heads—or their hearts...

I was all kinds of excited when this book first popped up on my radar. Regency period? A favourite. Romance? Yes please. Young ladies sent to a reformatory school which is actually a front for a training school for spies and espionage? Give it to me now.
It all started off so well, but unfortunately there were all kinds of problems littered throughout that stopped this book being the read I’d hoped it would be.

Let’s start with the biggest thing for me. I am a huge stickler for historical accuracy. If you’re going to write a book and set it in a particular time period then for goodness sake get the etiquette, speech and ideas right. This felt like a contemporary novel dressed up in pretty dresses to look like an historical one, without any of the constraints of the time period. It felt like it was attempting something along the same lines as Gail Carriger’s ‘Finishing School’ books, but whilst Carriger adheres to the rules of the period and then plays with the ideas and brings in humour, ‘A School for Unusual Girls’ just ignored all of the rules and as a result really frustrated me (and anyone else who expects some modicum of historical accuracy when reading an historical novel.)

The second big frustration was two-fold – the lack of any real depth to the characters and the instalove. These were kind of combined as the lack of depth contributed to the love story feeling forced and out of place. Georgia knows the man for all of four days before she decides she’s completely in love with him (and vice versa) and that’s what sets off the chain of rather obvious and ludicrous events of the second half. The girls at the school were fascinating and I wanted to know more about them, but aside from Tess they are largely relegated to the background, presumably so they can be trotted out in future books and not have the reader know a huge amount about them.
The whole thing just felt like an exercise in frustration. It was full of great ideas poorly executed. A mixture of truly interesting characters and then our heroine who seemed largely unable to function like a coherent human being. For someone who is supposedly intelligent and logical she really doesn’t show it. It feels like it’s going to be a novel based in reality and then there are vague allusions to the supernatural and premonitions which felt forced and jarred me because where? What? Why? They are thrown in and then the reader is given nothing more – no explanations or anything. That actually drove a huge amount of the irritation for me. Georgie is thrown into this school against her will and then no one will talk to her or explain anything to her and she isn’t really given a choice. If the idea behind the school isn’t spoiled in the blurb then this refusal to answer questions might prolong the tension, but as it is it was just irritating in the extreme.

Then there were the niggly errors, like a two days passing and then characters referring to the events from two days previous as yesterday which made the whole thing infinitely more confusing and frustrating than it needed to be. There were also problems with tenses and grammar in some places – all things that could have been easily rectified in edits.

I was so excited to read this novel, I had such high hopes and expectations, but unfortunately it failed to live up to any of the expectations. It suffers from the problem that a lot of start of series novels seem to find themselves in, they are so busy building up the set up that they don’t focus on becoming an interesting story in their own right, they are effectively a prequel for the second book where the story will hopefully start to kick off.

There were some interesting elements – the premise, some of the other girls, the alternate history – but unfortunately they are buried in amongst so many errors and irritations. I may look out for the next book, but my interest hasn’t been held and I will most likely avoid the second book in the series unless I hear that it has improved drastically on this one.