Review: Hold Me Like a Breath by Tiffany Schmidt 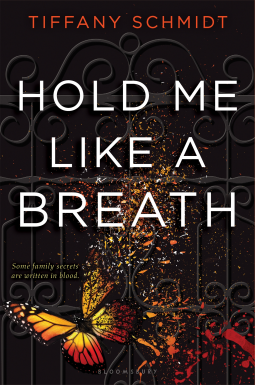 Penelope Landlow has grown up with the knowledge that almost anything can be bought or sold—including body parts. She’s the daughter of one of the three crime families that control the black market for organ transplants.
Penelope’s surrounded by all the suffocating privilege and protection her family can provide, but they can't protect her from the autoimmune disorder that causes her to bruise so easily.
And in her family's line of work no one can be safe forever.
All Penelope has ever wanted is freedom and independence. But when she’s caught in the crossfire as rival families scramble for prominence, she learns that her wishes come with casualties, that betrayal hurts worse than bruises, that love is a risk worth taking . . . and maybe she’s not as fragile as everyone thinks.

This blurb had me incredibly excited and envisaging something close to The Curse Workers trilogy by Holly Black but with less magic and more body parts, but alas, it was not to be.

The problems with this one all came down to pacing and character. In that there wasn’t really any and it was all over the place. It felt almost as though it were two different stories. The first one, Penelope Landlow, crushing on a guy, never allowed to be touched, daughter to the boss of the family. The second one, Penelope Landlow, girl living in New York, never allowed to be touched but doesn’t care about it, who is finding her own way in the world and falls in love. Sadly the two different plots don’t really mesh and what you’re left with is this incredibly bizarre mix of ideas and frustrations.

Penelope is an incredibly weak character. She comes across as much younger than she actually is, whines about how no-one tells her anything and ends up being one of the most dense characters I’ve come across in fiction. She doesn’t put anything together until it’s pretty much too late and you’re left feeling incredibly frustrated and wanting to shake her. In part because the plot twists are no real twists at all and are in fact incredibly obvious right from the start.

The characters are all under developed, motives are squiffy at best, and nothing really makes a whole heap of sense. None of the characters felt real or particularly likeable, the dialogue was awkward – particularly anything involving Carter, Penelope and Garret, and decision making felt like it was being made by pulling random nonsensical ideas out of a hat at points. Penelope’s decision making skills were that bad.

Then of course there’s the crime family element, which had me so hooked from the blurb. Only we don’t really get anything to do with the family. There are some odd moments of boredom and statistics, and a few menacing guys with guns, but it didn’t feel real. It didn’t really make any impact on the story, it felt more as though it was a plot twist thrown in to make the story cool. It felt at times that Penelope’s illness was used as a get out clause so that everything could remain underdeveloped and just be a background idea. Penelope is kept away from the business and never really makes any effort to change that. It feels like life just happens to her and she expects the men around her to protect her – an ideal that changes a little as she experiences some character growth towards the end of the book, but not enough to redeem her.

The romance was not really a romance at all. It starts as a straightforward boy and girl, but then of course half way through there has to be a second boy introduced to make things more complicated. Oh for the love of all that’s good will someone give me a young adult novel without a love triangle being thrown in?
Romance with the first boy is awkward and cringey at best, with words like marriage being thrown about when they haven’t even kissed. Then second boy comes along and literally stalks her. Repeatedly. Twenty four hours with him though and she’s in love. It was so unbelievably frustrating and aggravating to have such awkward and instalove romances being thrown about.

This could have been a really fantastic story. Penelope had all the makings of a great character and combine that with the crime family, being the boss’s daughter, plus her auto immune disorder and this could have been something amazing. Instead we’re given a whiney heroine who is perfectly ok to let the men around her rule her life and wait for them to come and save her, despite the odd temper tantrum that she isn’t allowed to do anything. She never actually tries to seize control or act, or in some cases even think and put the pieces together. She is someone who seems to just let life happen to her. We’re then also given a brilliant idea of this crime family who deal in organ transplants and it’s all shoved aside in favour of the awkward romances. I wanted to love this, I was so excited for it, but instead it ended up being a frustrating story that didn’t even come close to the potential set up in that blurb.