Review: Once Upon a Tower by Eloisa James 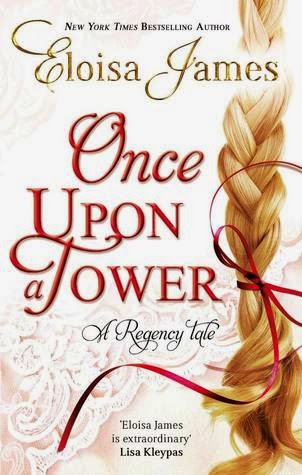 Once upon a time…
A duke fell in love
Gowan Stoughton of Craigievar, Duke of Kinross, values order and self-control above all else. So when he meets a lady as serene as she is beautiful, he promptly asks for her hand in marriage.
With a lady
Edie—whose passionate temperament is the opposite of serene—had such a high fever at her own debut ball that she didn’t notice anyone, not even the notoriously elusive Duke of Kinross. When her father accepts his offer… she panics.
And when their marriage night isn’t all it could be, she pretends.
In a tower.
But Edie’s inability to hide her feelings makes pretending impossible, and when their marriage implodes, she retreats to a tower—locking Gowan out.
Now Gowan faces his greatest challenge. Neither commands nor reason work with his spirited young bride. How can he convince her to give him the keys to the tower…
When she already has the keys to his heart?

First complaint is a side note unrelated to the novel per-se. Why can’t publishers double check things like the names of their hero on the blurb of a book before okaying it? It was incredibly confusing and frustrating to go into the novel expecting the hero to be called Rhys and then wonder why he hasn’t shown up and this guy Gowan is there instead. Petty, but frustrating.

I love Eloisa James’ novels. They are witty, clever, and full of fantastic heroes and heroines just waiting to pull you into a slightly more romantic world. Whilst nothing will beat the ‘Desperate Duchesses’ series for me personally, James’ retelling of fairytales as regency romances has been inspired. I adored Cinderella (A Kiss at Midnight) and Beauty & the Beast (When Beauty Tamed the Beast) but there was something about this version of Rapunzel that just didn’t quite do it for me.

I read romance novels for escape when life becomes particularly problematic. I like to know that there is a safe formula that will ensure a happy ending (with a few bumps along the way) and a wonderful hero waiting to sweep the feisty and intelligent heroine off her feet before the last page.

So when I’m faced with a truly unlikeable hero it kinda puts a crimp in my plans. Gowan really frustrated me. I understand that he was meant to grow as a person and develop and change, but given the awful things that he says to Edie, he never did enough grovelling to really creep back into my good graces. He decides to follow a regimented plan for their marriage bed and as a result doesn’t communicate or even really acknowledge Edie. Edie meanwhile is in so much pain from his ministrations that she lies woodenly in bed and tries desperately not to whimper and let him get on with it. Not exactly romantic.

Now I love that James decided to go with a new version of the story, I love that she tackled problems that you don’t normally see in romantic fiction – that the hero is too well endowed and that the heroine finds copulation not only not pleasant, but downright painful. This is excellent that it’s being explored in fiction. I learnt an awful lot about relationships and sex through romance novels, and this is something that I haven’t seen tackled before, so I want to stand up and cheer for the fact that James is tackling it head on. My issue lies with Gowan being so awful to Edie (to everyone actually) and yes he has an epiphany, and yes he apologises, but for me the reader who has just been through all this awful terrible nightmare along with Edie it is not enough. He wrecks her emotionally. And sorry is not enough to repair that damage. When he returns to her she is a shell of her former self and yes she puts up a small amount of resistance and yes he is repentant, but thirty odd pages is not enough to convince me that this abusive relationship has been repaired. It was not intentionally abusive, but the effect is still the same. There needed to be more redemption, a longer road to recovery, not a quick fix, and that let down the entire novel for me.

I imagine most people will read this book and enjoy it as they would any other of James’ novels, but for those people who have either experienced or witnessed abusive relationships, Gowan is not going to be a hero you end up rooting for.