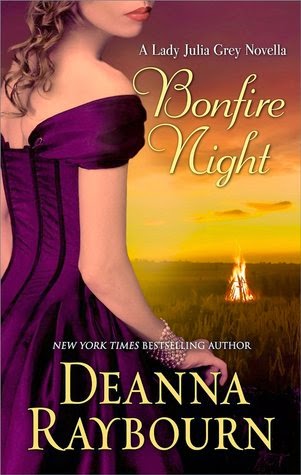 It's the autumn of 1890, and almost a year has passed since—much to their surprise—Lady Julia and Nicholas became parents. Just as the couple begins to adapt, a solicitor arrives with a strange bequest. Nicholas, it seems, has inherited a country house—but only if he and his family are in residence from All Hallows' Eve through Bonfire Night.
Neither Lady Julia nor Nicholas is likely to be put off by local legends of ghosts and witches, and the eerie noises and strange lights that flit from room to room simply intrigue them. Until a new lady's maid disappears, igniting a caper that will have explosive results…

I adore the Lady Julia mysteries in a way that defies attempting to explain it like a rational human being. Let’s just leave it at this: they are wonderful books and if you haven’t read them yet then you need to, because Raybourn is one of the best writers I have had the pleasure of reading. This series of books found me quite by chance when I had finished reading Gail Carriger’s Parasol Protectorate Series and wanted something similar. Amazon, in its infinite wisdom suggested I read these, and I have never looked back.

They are brilliantly constructed mysteries with a wonderful heroine at their heart, a broodingly acerbic hero and a cast of excellent characters that make these such a pleasure to come back to. With all that in mind, when the news came out that Deanna Raybourn was parting from her publishers and the chances of another Lady Julia novel had just dropped to virtually non-existant, I was devastated. I love these books and I had hoped to get just one more book to tie up some more ends that had been left. Instead we got the novellas, and whilst I was initially hesitant, Raybourn has done a truly spectacular job of not only telling more of Julia’s story through the four novellas, but also weaving in elements of it into her three novels set in the twenties. Between them we’ve been given a very good idea of where Julia was heading and what happened to her after the events of ‘The Dark Enquiry’.

So with everything built up to a head with the Vespiary in the last novella as well as ‘Night of a Thousand Stars’ I was expecting more of a conclusion where we see the start of that, of how Julia and Brisbane become involved and set it up and the beginning of their parenthood with baby Jack. We definitely got baby Jack and parenthood but there wasn’t a whisper of the Vespiary anywhere, which was quite disappointing.

The novella was a beautifully written little side story, one that I could have quite happily read much more of, but as a final instalment for such a wonderful series? It really didn’t even come close. There was no real closure to speak of, it just felt like another one of Julia and Brisbane’s mysteries – something I am always happy to read – but it didn’t feel like the end of the series.

Part of me now lives in hope that one day we will get another book or novella, something to give us the closure needed on all of these threads (or some mention or cameo in another series just to tie everything up) but I have a horrible feeling that that may not happen. So my rating is not on the novella as a series end, but on the novella as a story (which is wonderful) instead.

Now let's just hope that the publishers decide to honour this series by creating a paperback with all four novellas in, so that all readers can enjoy them, not just those with e-readers.