Review: The Taker by Alma Katsu 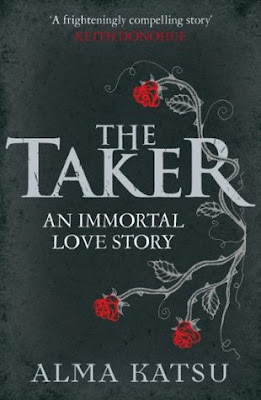 Thanks to Random House for sending me a copy to review.

True love can last an eternity . . . but immortality comes at a price…
On the midnight shift at a hospital in rural Maine, Dr. Luke Findley is expecting another quiet evening of frostbite and the occasional domestic dispute. But the minute Lanore McIlvrae—Lanny—walks into his ER, she changes his life forever. A mysterious woman with a past and plenty of dark secrets, Lanny is unlike anyone Luke has ever met. He is inexplicably drawn to her . . . despite the fact that she is a murder suspect with a police escort. And as she begins to tell her story, a story of enduring love and consummate betrayal that transcends time and mortality, Luke finds himself utterly captivated.
Her impassioned account begins at the turn of the nineteenth century in the same small town of St. Andrew, Maine, back when it was a Puritan settlement. Consumed as a child by her love for the son of the town’s founder, Lanny will do anything to be with him forever. But the price she pays is steep—an immortal bond that chains her to a terrible fate for all eternity. And now, two centuries later, the key to her healing and her salvation lies with Dr. Luke Findley.

This book and I, we had issues. Which is tragic as otherwise it would have been a solid four stars, as it is it barely scraped up to three.

Let’s talk about what I loved first. I loved the concept and for the most part it was executed really well. I loved the present day narrative interwoven with Lanny telling Luke about her childhood, growing up in St Andrew, her love for Jonathan and everything that came with it. Her voice was fresh and clear and I liked the slow build of the narrative. Cutting it between her past and her present kept both timelines fresh and I was desperate to find out what happened with each – although I admit I found Lanny’s account of her past to be a little more fascinating. It was vivid and it was intriguing and I was curious to see where it all went.

And then she got to Boston, and I was still enjoying the story, even when it started to get a little creepy and she fell in with the wrong crowd, and then we had Adair’s story, and I’m afraid to say I put the book down. For about a month before I finally pushed myself to finish it.

Now I liked the idea that we would find out more about Adair, but to have one big chunk that was nothing but his misery really bogged the narrative down. I didn’t care about him, not even to feel pity, and I was desperate to get back to Lanny’s story. Now I realise that some of his backstory was relevant and actually proved to be quite pivotal later on in the book, but there are ways of dumping that much information on the reader without creating such a bog of information to wade through that the reader loses sight of why they’re reading this book in the first place. It wasn’t even that it was a lot of information at once, my issue was with the content.

I have no problems with sex in a book, and yes there is quite a bit of sex in this one, and it is not the overblown romanticised accounts you often find – it’s hard and gritty and painfully realistic at points. However when we find out more about Adair we discover that he was held captive against his will, brutally beaten, punished, sodomised, raped and generally demeaned and tortured. And there is just so much graphic brutality that I lost sight of anything that I liked about the book and couldn’t really remember why I was still reading it – at which point I put down the book for several weeks before I convinced myself it couldn’t really be as bad as I remembered it. It was. But I skim read the remainder of the account of Adair’s past and then got back to Lanny.

If such graphic events enhance or add to the book, and there is a point to them, then yes ok, fair enough, stick it all in. But this felt like it was there for the sake of shocking the reader. I understand that we needed to understand that the Physick was a bad person, but there are ways of doing that without fifty odd pages of rape and beatings. There seemed little other point to Adair’s account, and at that point you kind of have to question why something like that has been put in. Particularly as this was being marketed as similar to Amy Plum’s books but for slightly older teens. Teens, really?

And after Adair’s account it felt like there were no holds barred, rape and beatings for everyone galore. And the thing I found really sickening was the fact that the characters are almost seduced and romanticised by their rape.

So yes, that kind of put a dampener on the book for me, but eventually it felt like it got back on track a little and I really liked the pace towards the end where everything started to come together and we finally had some resolutions.

The writing was exceptionally good, and as I said I found Lanny’s tale fascinating, and I found the idea of immortality and the strain that puts on the mind and soul that Katsu explores equally fascinating. However the good bits of the book were not really enough to push it up into a good book again for me.

I do have the sequel ‘The Reckoning’ and I am curious, but at the same time very hesitant to read it. I’m not squeamish and I don’t mind graphic elements to a book if it enhances the story, but as soon as it becomes gratuitous I lose my patience. So I’ll probably give the sequel a go one day, but I doubt it will be for a while.