'Panic Roommate'
Schemes, parties, and idiotic plot lines.
Hm, ok, the latest episode of Gossip Girl “Panic Roommate” was a step up from the last couple of episodes, but still isn’t quite up to the usual standard we know and love.

Serena killed more brain cells off, probably with blonde hair dye, and is still going mushy over the one guy who’s turned her down – who incidentally almost killed her with his sister and scheming ways a few episodes back. Blair continued to be awesome, and manoeuvred Chuck and Nate into being useful – a shock to Man Bangs system after weeks of staring moodily into his hair. Dan continued to be self-righteous and silly, and Eric got led around by someone older and smarter than him…
1)      Damien, Damien, Damien – you have such potential, why are you being such a fool? Your schemes, whilst working, are pathetic at best, and I refuse to believe that this is the only story arc the writers are going to give you. Please go away and come back more vengeful and awesome next week. Ta.
2)      Eric – I’ve hidden all the sharp objects. Seriously, it’s only a matter of time before GG goes back to its roots.
3)      Dan. Since when are you part of anyone’s team? Particularly willingly? I think all of this time spent with Blair has gone to your head. You never have or will be a true schemer; you’re too self-righteous and end up owning up to it AFTER FIVE MINUTES. Also, learn to trust at least a couple of your instincts. You at least remember that Ben and Juliet did bad things – try not to trust ben too much. Or, you know, leave Serena unguarded in the flat with him for too long…
# 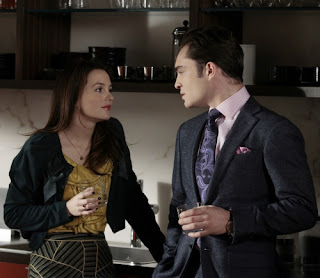 On the other hand, it was such a refreshing change to see Blair and Chuck back to their scheming ways. It may not have been the best plan they’ve ever had, but it was certainly entertaining – particularly the phone call to convince Nate and baby Thorpe that they’re awesome. Actually, it was just nice to see Blair interact with someone other than Serena – I worry that if she spends too much time with her, the blonde will rub off. The banter between Blair and Nate was really good, and more than made up for the lack of Dair this episode. It gave man bangs a chance to do something a little bit different, and flirt with someone new for a chance.
Urgh, Chuck, you make me want to vomit with your idiotic schemes. I can’t believe that his ‘master plan’ hinges on baby Thorpe falling in love with him. Sigh. I know he thinks that women are putty in his hands, but that’s the old Chuck, the one before he got whipped by Blair – who is totally getting her *itch back by the way. 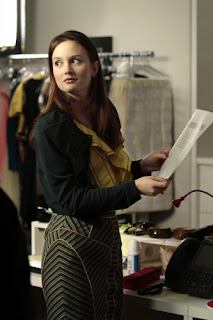 Chuck’s schemes are pathetic, if he really wanted Bass industries back, he could have done so much by now, which would have been a little more plausible and probably already worked. Ah for the good old days when these guys were actually a force to be reckoned with, despite the fact that they were all technically children. I miss those days.
Was anyone else horribly disappointed that Ben continues to be so pathetically pants. I am bored of him now – unless the writer’s pull something awesome out of the bag for him, or give him a face transplant, I am going to imagine he has a paper bag over his head in every scene until he is run out of town. Hopefully by Dan, because it’s always funny seeing Dan threaten to run someone out of town. I keep expecting him to wear a headband.
Lily was blissfully absent, and Rufus continues to be useless. All must be well on the UES.
All in all, a better attempt than last weeks. I actually resorted to house work during the episode last week I was so bored. But we’ve still got a long way to go yet GG. Sort it out.
Posted by Rosy at 01:35