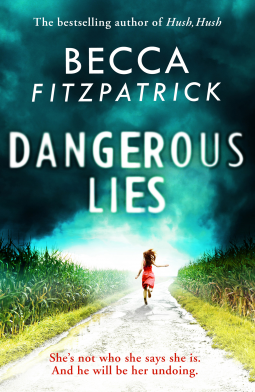 Stella Gordon is not her real name. Thunder Basin, Nebraska, is not her real home. This is not her real life.
After witnessing a lethal crime, Stella Gordon is sent to the middle of nowhere for her own safety before she testifies against the man she saw kill her mother’s drug dealer.
But Stella was about to start her senior year with the boyfriend she loves. How can she be pulled away from the only life she knows and expected to start a new one in Nebraska? Stella chafes at her protection and is rude to everyone she meets. She’s not planning on staying long, so why be friendly? Then she meets Chet Falconer and it becomes harder to keep her guard up, even as her guilt about having to lie to him grows.
As Stella starts to feel safer, the real threat to her life increases—because her enemies are actually closer than she thinks…

‘Dangerous Lies’ ended up being a bit of a mixed bag for me. On the one hand I was caught up by the story and found myself picking it up at odd moments, desperate to read just a few more pages whenever I had time. On the other hand, problems galore.

Let’s start with the biggie, Stella herself who is one of the most unlikeable heroines I’ve read this year. She’s whiney, she’s self-centred, she says some of the most awful things imaginable (I frequently did double takes, particularly when she’s thinking/talking about Innie’s pregnancy, because dear god girl put some kind of mouth filter thought process in place.) and she’s an all round not nice person. That makes it hard to root for her and to want to see her story through. Sure she does have some character development throughout the story but it’s not really enough and left me wanting to shake her at various points.

Side note: what on earth were they thinking when they put her into witness protection and changed her name from Estella to Stella?!... And Stella’s response to that name. Surely with a name like Estella, her name is going to have been shortened to Stella at some point in her life? Everything around the name change/her real name made my head hurt.

Some of it was really well done, other parts just seemed overblown and clichéd. I loved the slow ambling plot, just seeing Stella get used to Thunder Basin and its residents and watching her try to fit in. The day to day existence was great to see and I really enjoyed those parts of it. But then there was everything else, and those were the points that didn’t work quite so well.

We’ve got Stella’s boyfriend Reed who gets sent elsewhere for protection. The only way we really got to know Reed was through his letters that Stella had managed to smuggle out to Thunder Basin with her. Lovely idea, poorly executed. Reed comes across as an absolute arse, really truly unlikeable, Stella why are you bothering with this guy? It made her devotion to him seem completely unexplainable; add in that as soon as he’s declared missing she goes from pining and trying to get in touch with him to ‘oh well, make out time!’ and it’s even more bizarre. That his story is left so unfinished with no real ending or resolution is the icing on the grumpy cake. (Side note: Thanks so much Becca Fitzpatrick for doing a disservice to Fibromyalgia sufferers everywhere by including a little talked about illness and painting it atrociously. That really made me furious.)

The other characters are mixed, I enjoyed seeing Chet and Carmine and their interactions, but anything involving Trigger or Stella’s Mum seemed contrived and one dimensional. The rest of the characters are a hodge podge that make the town feel bigger but don’t really manage to be memorable.

Then there’s the plot. I’ve already said how much I loved the slow, hazy summer days – that was really well done. However a lot of the elements to do with the Witness Protection and the case were poorly handled. A lot of backstory was smushed in in one big info dump and the big climax happened in the last twenty pages or so with no real build up or pay off. It felt completely random. As a result I found it really hard to rate this one, but have ultimately gone for the lower rating simply because after a few days thinking about it the frustrations and gripes are winning out over the good points.

If you enjoy slow day to day existences and a gradual unfurling relationship then you’ll love the romance in this one. However if you’re picking it up purely for the crime/thriller aspects then it really doesn’t live up to expectations.