Review: All Fall Down by Ally Carter 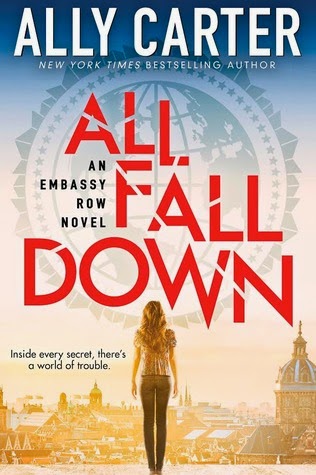 Huge thanks to Netgalley for sending me a copy in return for an honest review.

This exciting new series from NEW YORK TIMES bestselling author Ally Carter focuses on Grace, who can best be described as a daredevil, an Army brat, and a rebel. She is also the only granddaughter of perhaps the most powerful ambassador in the world, and Grace has spent every summer of her childhood running across the roofs of Embassy Row.
Now, at age sixteen, she's come back to stay--in order to solve the mystery of her mother's death. In the process, she uncovers an international conspiracy of unsettling proportions, and must choose her friends and watch her foes carefully if she and the world are to be saved.

I absolutely love Ally Carter’s previous series, both Gallagher Girls and the Heist books, so I couldn’t wait to get my hands on her latest offering and get to know a whole new world. Unfortunately my anticipated love affair with ‘All Fall Down’ didn’t quite go as I’d anticipated.

The concept is great, the world is wonderful, the writing is up to Carter’s brilliant standard, but sadly there were problems. The biggest one being Grace herself. I never really felt like I connected with Grace, which is I think due in part to the fact that Grace is the most unreliable narrator I have ever come across in fiction. By about a third of the way through the book I just didn’t trust her at all, which meant that my enjoyment of the book became severely compromised.

It comes across as for a much younger audience, perhaps on that transition line for those just coming into young adult fiction. In part due to the style, but mostly again due to Grace. She never struck me as a sixteen year old teenager, she felt as though she’d gotten stuck at age thirteen. Understandable given the circumstances, but a little bit frustrating to read.

It also reads more like a film script than a book in places, due to the flashbacks that Grace keeps on having. This sort of works, but it mostly just made me feel like it was meant to be a movie, and actually became a little bit frustrating the further in I read.

I absolutely loved the characters surrounding Grace, her oddball team of espionage amateurs were fantastic, and really I just wanted more of them! The only character I wasn’t really sold on was Alexei, because like Grace we never really got to see a huge amount of character – is he good, is he bad, is he just playing her or spying on her? All questions we may see answered at a later point in the series, but for a first book I felt entirely wrong footed by too many elements, that made me question whether I would really want to invest more time in the series.

All in all it was an intriguing premise that worked in some areas and fell flat on its face in others. It’s a good set up for things to come, but there were an awful lot of awkward parts and some serious issues with Grace and her likeability and general trust developing between her and the reader. There’s a lot to love though, and the pacing means that it’s a fast and tense read that will leave you with no idea where things are going from one page to the next.