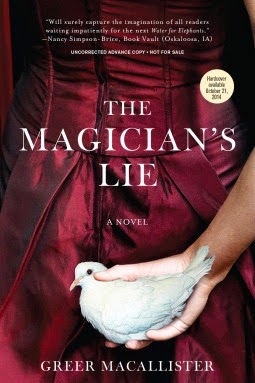 Huge thanks to Netgalley for providing me with a copy in return for an honest review.

Water for Elephants meets The Night Circus in The Magician’s Lie, a debut novel in which the country’s most notorious female illusionist stands accused of her husband's murder --and she has only one night to convince a small-town policeman of her innocence.
The Amazing Arden is the most famous female illusionist of her day, renowned for her notorious trick of sawing a man in half on stage. One night in Waterloo, Iowa, with young policeman Virgil Holt watching from the audience, she swaps her trademark saw for a fire ax. Is it a new version of the illusion, or an all-too-real murder? When Arden’s husband is found lifeless beneath the stage later that night, the answer seems clear.
But when Virgil happens upon the fleeing magician and takes her into custody, she has a very different story to tell. Even handcuffed and alone, Arden is far from powerless—and what she reveals is as unbelievable as it is spellbinding. Over the course of one eerie night, Virgil must decide whether to turn Arden in or set her free… and it will take all he has to see through the smoke and mirrors.

When anything tries to compare itself to ‘The Night Circus’ I am hesitant. ‘The Night Circus’ is such a hauntingly beautiful novel that holds such a special place in my heart that nothing ever seems to come close to touching it. ‘The Magician’s Lie’ comes incredibly close though.

The novel is split, between the night when Arden’s husband is found dead and she goes on the run, only to be caught by Virgil, a police officer, and her retelling of her life story whilst in custody. One night and one incredible story later, Virgil must try and untangle what has really happened.

It’s an intriguing premise – a female magician in a period when Arden is the only one, a touring magic show, a desperate and breathless backstory with true love tangled up in it all. The novel is beautifully written and brilliantly executed. The only places where it stumbles are when we are brought back to reality and Arden trying to persuade Virgil of her innocence. The pace slows and I found myself desperate for them to stop talking and for Arden to get back to re-telling her own story.

The novel has been thoroughly researched and it shows, the characters and setting peel off the page and immerse the reader in the tale. It is brilliantly constructed and stitched together and I found myself coming to care about Arden and her story very quickly. She is a wonderful heroine with a fascinating life and I loved her from the start.

The secondary characters are all wonderfully written and the novel is held together by their relationships and interactions. It is startling evocative and beautifully descriptive and I found myself falling in love the further into Arden’s story we delved.

Whilst lovers of ‘The Night Circus’ will be drawn by the comparison, be aware that the emphasis is much heavier on the circus and the illusions and is based in reality with less magic, but that makes it no less magical to read. It is an utterly spellbinding book that explores magic, illusions and the desperate struggle for Arden as a woman to carve out her own place and identity in a male dominated society. I loved this book and it stayed with me long after I read the last page.