Review: A Year in the Merde by Stephen Clarke 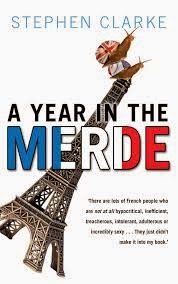 Paul West arrives in Paris to start a new job - and finds out what the French are really like.
They do eat a lot of cheese, some of which smells like pigs' droppings. They don't wash their armpits with garlic soap. Going on strike really is the second national participation sport after petanque. And, yes, they do use suppositories.
In his first novel, Stephen Clarke gives a laugh-out-loud account of the pleasures and perils of being a Brit in France. A Year in the Merde tells you how to get served by the grumpiest Parisian waiter; how to make amour - not war; and how not to buy a house in the French countryside.

I’ve read a few other books by Stephen Clarke and really loved them; his writing is eloquent and frequently laugh out loud funny, and he tackles his subjects with both wit and an obvious deep love of the country and culture that he is writing about. It’s just a shame that he didn’t bring any of that to ‘A Year in the Merde.’
When I picked it up I didn’t realise it was a novel, so was expecting more of a travel memoir recounting a lot of the pitfalls of moving to France that people experience. What I got instead was a truly awful main character who is not only feeling displaced by his move to Paris, but is downright rude and obnoxious and makes no effort whatsoever to be anything other than disparaging and condescending throughout his stay.

Truly, other than a few more readable moments this was a disaster from start to finish. The humour was thin on the ground, and the book was instead populated with awful comments about the French culture and the people. Paul is a thoroughly unlikeable character who spends his time sulking, whinging, and taking women out for drinks and not understanding why some alcohol and half a hour of conversation don’t result in immediate sex.

It was demeaning and quite frankly disgusting in places and I’m not quite sure why I kept reading.
The drama was propelled by his caricature pantomime baddy of a boss who is doing all sorts of shady dealings and Paul just sits back and lets it all happen. There is no driving force, it is simply the ramblings of a man who couldn’t be arsed to do anything with his job in a new country.

It only vaguely tackled a few of the difficulties that people find when moving to France for the first time, and that wasn’t really enough to redeem it. It certainly doesn’t tackle the perils of being a Brit living in France. If you’re looking for an interesting insight into living in Paris, I recommend ‘Paris in Love’ by Eloisa James. I would also recommend some of Stephen Clarke’s other books, but steer as far away as possible from this pile of merde.