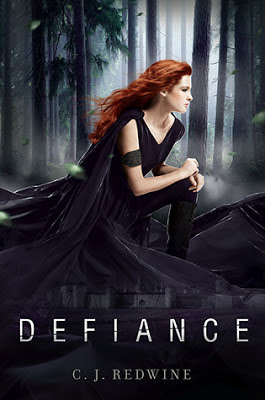 Within the walls of Baalboden, beneath the shadow of the city's brutal leader, Rachel Adams has a secret. While other girls sew dresses and obey their male Protectors, Rachel knows how to survive in the wilderness and deftly wield a sword. When her father, Jared, fails to return from a courier mission and is declared dead, the Commander assigns Rachel a new Protector, her father's apprentice, Logan--the same boy Rachel declared her love for two years ago, and the same one who handed her heart right back to her. Left with nothing but a fierce belief in her father's survival, Rachel decides to escape and find him herself. But treason against the Commander carries a heavy price, and what awaits her in the Wasteland could destroy her.
At nineteen, Logan McEntire is many things. Orphan. Outcast. Inventor. As apprentice to the city's top courier, Logan is focused on learning his trade so he can escape the tyranny of Baalboden. But his plan never included being responsible for his mentor's impulsive daughter. Logan is determined to protect her, but when his escape plan goes wrong and Rachel pays the price, he realizes he has more at stake than disappointing Jared.
As Rachel and Logan battle their way through the Wasteland, stalked by a monster that can't be killed and an army of assassins out for blood, they discover romance, heartbreak, and a truth that will incite a war decades in the making.

There was so much buzz floating around the interwebs in the build up to the release of ‘Defiance’ that I couldn’t believe that it could possible live up to the hype, but with a blurb and cover like that there was no way I was going to wait long to find out, and it absolutely blew me away.

Defiance is an absolutely stunning debut novel from Redwine. It smoothly combines elements of dystopia and fantasy and wraps it all up with a fantastic heroine, a gorgeously clever hero and a brilliant plot and delivers it with a bow on top.

The plot races along at a stunning rate, and I was engrossed from the first page. I loved the alternate view points of both Rachel and Logan who offered such different insights on this world that they lived in. The view points meant that we really got to see all of the elements playing out together and unfolding around each other, and I loved the difference between Logan’s thought process, very logical and methodical but in no way any less determined than Rachel who blows straight into everything with blind stubbornness and strength. I loved both of them for their differences and for their similarities in that they were both so dissatisfied with this life they had been given and wanted to make it better. Be it finding her father or freeing the people, or just getting out. And I loved the sparks and the chemistry between them…

It definitely had the same feel for me as ‘Poison Study’ by Maria V. Snyder, which was a very good thing, just on the other side of the Commander’s fortress walls…

The world building is fantastic. There’s enough set up and detail to really push this novel on its own, but with enough that is built up and left open to explore in the next book. I really believed the world that I was pushed into and I loved this exploration of the idea of women needing protectors and the limitations and punishments that are placed along with that. It was a fantastically galling and restricting view, and I loved seeing Rachel and even to a certain extent Logan, push and chafe against these restrictions.

I was able to forget where it might be going or second guessing the plot and just immerse myself in the experience of reading this book. I loved it, I raced through it in a single sitting and after finishing immediately wanted to go back into the world again. Redwine has stunned me with this new novel and I cannot wait to see where she takes the series next.