Author Q & A with Gail Carriger 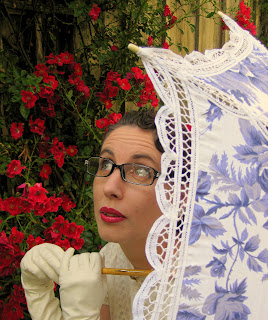 The Parasol Protectorate Series, written by the fabulous Gail Carriger is one of the wittiest Steampunk romps available at the moment. To celebrate the release of ‘Heartless’ the fourth book in the series, in the UK today, Gail was lovely enough to answer a few questions about the series, her writing habits, and whether tea really does trump all.

“Your latest book in the Parasol Protectorate series Heartless is just out, can you tell us a little bit about it?”
Well, I tend to try to parody different types of Victorian literature with each Parasol Protectorate book. Soulless poked fun at the early romance novels, Changeless went back to the gothic roots of all my favourite genres, Blameless was intended to be an Alan-Quartermian-style Boy's Adventure novel. Heartless is a cosy Sherlock-Holmes-style mystery. Alexia hasn't Sherlock's mind but she has his practical approach to problem solving, and his propensity for charging about willy-nilly no holds barred. However, the role of Dr. Watson will be played by an every increasing bevy of adorable young men. A girl's gotta have her fun!
“If readers haven’t yet discovered your fabulous series yet, how would you tempt them to pick up a copy of Soulless?”
Soulless is Jane Austen does urban fantasy meets PG Wodehouse does steampunk. It features a soulless spinster confronting Queen Victoria’s grumpy werewolf investigator over the issue of lisping vampires.
“Have you always wanted to be a writer? Was it something in particular that drew you to becoming one?”
I always wanted to be an archaeologist, writing was rather more like breathing, just something I did. It was only with Soulless that I realized I might actually have a career as an author. I still haven’t
recovered from the shock.
“Do you have any quirky habits when writing or a particular time of day when you’re most creative?”
Oh I’m nothing if not civilized. With a project due and no day job
(mine’s intermittent) I write from 2 to 7 every weekday – with breaks
for tea. The rest of the household, with the exception of the cat, is
quite respectful. I have a closed–door policy. Which is to say: if the
door to my room is closed my policy is to throw the nearest moveable
object at anyone who disturbs me. They’ve learned. Even the cat.
“What is your weapon of choice if anyone disturbs you whilst you’re writing?”
Unfortunately, sometimes the nearest moveable object IS the cat.
“How did you come up with the idea for the books?”
The simple fact is: this was what I wanted to read. I like steampunk but it tends to be a little too dark and riddled with technobabble for me. I enjoy urban fantasy but am not wild about a modern setting. So I thought I might just combine the two, and then shake it up with a jot more romance and a whole lot of comedy. Then I started thinking about what kind of world could accommodate all these different elements. I’m familiar with the Victorian era and I find it a rich source of amusement in and of itself. Those ridiculous fashions and that obsession with etiquette seem the perfect time period to drop in vampires (dictating such things) and werewolves (chaffing against them) not to mention steam technology. It seemed to me that what comedy I couldn’t supply with plot and character, an alternate Victorian London could provide just by being itself.

“The research must have been quite awesome for the series – were there any books or sources you found particularly useful?”


I had a fair bit of expertise in certain aspects of the era (fashion, food, manners, literature, theatre, upper class courting rituals, antiquities collecting) when I started but great gaps in other areas that I quickly realized needed to be filled. I spent a lot of time researching the gadgetry and technology of the day, travel and communications techniques, medical and hard science advances, not to mention other things like major wars and military strategies,
configuration of army regiments, geographical lay out of London in the 1870s (shops and streets names), newspapers, and government policies. I also looked into vampire and werewolf lore at the time. That’s the thing, you never know what information you are going to need until you need it, and inevitably the internet doesn’t have it. Since I’m writing alt history I can always disregard the facts, but I like to get it right first, before I mess with it. Most people won’t care to look up the details (or get it wrong by confusing my setting with
Austen or mid–Victorian, I’m specifically 1773) but even if it doesn’t make it into the book, it will irritate me if unwritten background information is flawed. Here is a blog about the sources I use when researching the Victorian Era.
http://gailcarriger.livejournal.com/154599.html
“Are any of the characters based on people you know?”
I love the ridiculous, in life, in literature, in television. Like most authors, I find myself borrowing from any or all of these places when building characters. I don’t like to be too stereotypical, if you
continue to read the Parasol Protectorate series you will find I have built up some archetypes in Soulless that I will take great glee in tearing apart in subsequent books. I do find myself, now, stopping in
the middle of a book or a movie I’m enjoying, stepping back and thinking: "I really love/hate this character, why? How did the writer do that? What qualities annoy/amuse me? What’s the trick?" It can get a bit aggravating, because it’s hard to simply immerse myself and be entertained these days.
“Do you ever find yourself having conversations with the characters, or have them being troublesome when writing?”
Far too often, I suspect. My sanity may be in question. Sometimes I even have conversations with myself as though I am a character.
“Which was the hardest book to write in the series?”
That's a toss up between Blameless and Heartless. Blameless needed a 1/3 rewrite for characterization reasons which was tough and required complex tread weaving throughout the whole book. Heartless just gave me a lot of stick as I went along. I also had more changes from my editor on Heartless than any previous book.
“What are you most proud of about the series?”
I'm happiest when someone writes me to say I embarrassed them my making
them laugh in public. That really makes me happy. I think I'm most proud, however, of my well rounded secondary characters. People really seem to identify with them.
“Everyone I’ve spoken to who’s read the series was first attracted by
your awesome cover and tag lines. Do you love them, and did you have
any say in the design?”
You know, I think the tag line is all Orbit’s doing. I did, however, have a hand in the cover. Very few authors are so lucky. I have a whole blog about how that came to be.
http://gailcarriger.livejournal.com/108176.html
“How difficult was it naming the books?”
Not difficult at all. Each title has something to do with both the plot and key character developments, usually of a secondary character as well as Alexia. They came quite naturally to me. It took a couple
days and five of my closest girlfriends, however, to come up with a series title. We painted a mural while we bandied about ideas.
“I adore your theories on Victorian society – any chance of a full re-explained history at some point?”
Well, like many authors, I have much of it in my head or jotted down. Sadly, I don't have the time to publish or write it online in a cohesive manner. Right now, I am in the enviable position of always having a new novel to write. I always encourage my fans to speculate, however, so I'm hoping future guest blog posts may come on the subject.
“Will you stick with steampunk for future books, or will you be doing something wildly different next?”
Steampunk for the next few years but I'd love to branch out at some point.
“Will you be doing a tour or signing over in the UK at some point? If there’s nothing planned can we bribe you with tea?”
I'm hoping to make it to London next spring, probably not much more than London. Although I might jet down to Devon to see my family.
“And finally, tea, treacle tart or pesto?”
Tea. No question.
‘Heartless’ is available in all good book stores, and to order on Amazon here. My review of the book will appear on this site shortly.
Posted by Rosy at 19:29