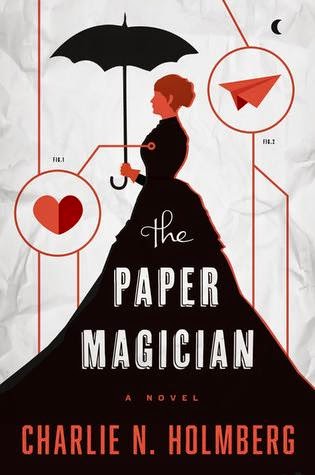 Ceony Twill arrives at the cottage of Magician Emery Thane with a broken heart. Having graduated at the top of her class from the Tagis Praff School for the Magically Inclined, Ceony is assigned an apprenticeship in paper magic despite her dreams of bespelling metal. And once she’s bonded to paper, that will be her only magic… forever.
Yet the spells Ceony learns under the strange yet kind Thane turn out to be more marvelous than she could have ever imagined — animating paper creatures, bringing stories to life via ghostly images, even reading fortunes. But as she discovers these wonders, Ceony also learns of the extraordinary dangers of forbidden magic.
An Excisioner — a practitioner of dark, flesh magic — invades the cottage and rips Thane’s heart from his chest. To save her teacher’s life, Ceony must face the evil magician and embark on an unbelievable adventure that will take her into the chambers of Thane’s still-beating heart—and reveal the very soul of the man.

I thought I was going to get one kind of novel and then it turned into something quite unexpected. Which is not necessarily a bad thing, it just took me a while to shift gears and get into the new part of the story. The premise is fantastic and I loved the idea and the different types of magic – I could have quite happily read a book entirely about that. However getting to know Thane through the exploration of his heart was an intriguing twist, and once I became used to it, one I quite liked.

I loved the characters, I loved the world, the whole imagination and the thought process behind the magics was brilliant. It was a quick novel that gave me an insight into this reality and left me wanting to go back for more. I’m looking forward to seeing and exploring more of Ceony's London in the next book as so much of this book was taken up with the exploration of Thane’s heart. The exploration was fascinating and really gave me a chance to get to know him as a character and also made Ceony’s attraction to him much more believable, but it did also contain the story into a very rigid set of parameters, and I really want to branch out and see more of this reality and the different types of magic and what they can do.

It was full of such wonderful little pieces of delight and magic. I loved Fennel. I loved the quiet space that Thane had created in the cottage. I loved the little glimpses of paper magic and what it could do. This was a quiet, understated novel that left me intrigued and wanting more.

However there are gripes and for this they are twofold. The first was the outburst where Ceony told one of the versions of Thane all the dark and terrible things she’d done. It felt forced and like it didn’t fit, not only with the character that we had come to know, but also with the story. It just felt completely random and like there was no reasoning behind it except to try and make Thane listen. It will be interesting to see if there is any payoff or expansion of this thread in the next book though.

The second is the language and slang. I am so incredibly picky about historical books being accurate. If you’re going to set them in a specific time period then I want them to speak appropriately to the time and country and it peeves me to high heaven when Americanisms creep into a book that is set in England. I am willing to be slightly lax in my standards because of the twists to the setting with the magic. If the magic has altered some elements of life then it may have altered slang too, you never know, however that only goes so far before I am ready to combust from the irritation of slang and Americanisms in a turn of the century English set book.


This is a book for fans of ‘The Night Circus’ with the same lyrical and whimsical feel that leaves you with not a vast amount of plot, but a whole world full of magic and wonder. Defintely one to have a cup of tea and an afternoon of reading with! And keep an eye out for the next two books in the trilogy!