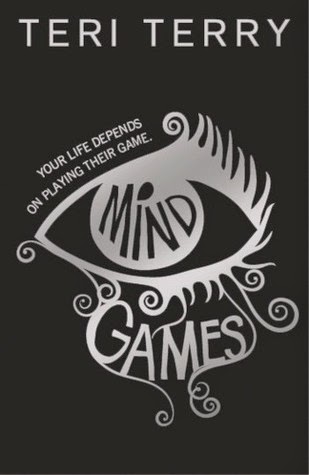 Luna is a no-hoper with a secret: in a world of illusion, she can see what is real. But can she see the truth before it is too late?
Luna has always been able to exist in virtual and real worlds at the same time, a secret she is warned to keep. She hides her ability by being a Refuser: excluded by choice from the virtual spheres others inhabit. But when she is singled out for testing, she can’t hide any longer.
The safest thing to do would be to fail, to go back to a dead-end life, no future. But Luna is starting to hope for something better, and hope is a dangerous thing...

It is rare that I finish a book and feel like I’ve just wasted my time. And it’s not a particularly great feeling, because even if I haven’t enjoyed a book I usually end up taking something away from it – even if it’s just a feeling of rage at the misuse of punctuation. However I finished Mind Games and didn’t really feel anything other than frustration.

It’s a great premise, a standalone book with an exciting world and idea that really grabbed me and made me desperate to read. The writing itself is not that bad, and there were points where I genuinely felt interested, but on the whole it didn’t work for me for these reasons.

First the lack of plot and the terrible pacing. This book was far too long for what it was. It dragged. I had to force myself to keep going with it because it wasn’t engaging me and nothing was really happening. You think everything is about to kick off half way through (finally) but then Luna has her memories and realisations taken away and we’re back to square one with Luna being entirely useless and ignoring what is staring her in the face, and the reader just becoming more and more frustrated as she prances around in different virtual worlds ignoring all the warning signs that this is a terrible idea. I was left at the end wondering why I’d bothered. There were so many plot holes that if you’d tried to float this, it would have sunk. The world wasn’t constructed in a believable fashion, there were problems left right and centre with character decisions. There were no real limits placed on the S’hackers and what they could do. Well, there were some but then one of them reveals she can turn back time and I face-palmed. You need rules for worlds, you need to have some sort of believable structure otherwise the reader just ends up frustrated and irate at the end of the book. You can’t just have random get out clauses to fix and/or break things as you fancy. And what little we get shown about the S’hackers and their abilities just didn’t make sense. There is no rhyme or reason to it, just a vague hey it’s due to genes and uh, well we don’t know… The whole concept needed laying out and editing and fixing together into some sort of coherent whole.

I also never really connected with the characters. If you’re going to have shaky world building you need a damn good lead character to keep the reader interested. But Luna just floated around. You never get a sense of who she is and what she wants, she is a device and not a particularly good one at that. And the secondary characters aren’t any better. There is nothing that makes them stand out, nothing that makes them real.


But the idea was so good, the concept great and full of some truly terrifying ideas. With an overhaul and edit and some work on pacing, plot and characters this could have been something great. As it is I finished it with a headache and wishing I’d read something else instead.