Review: An Ember in the Ashes by Sabaa Tahir 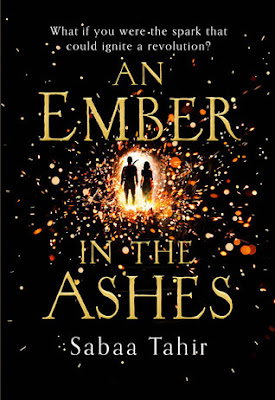 Laia is a slave. Elias is a soldier. Neither is free.
Under the Martial Empire, defiance is met with death. Those who do not vow their blood and bodies to the Emperor risk the execution of their loved ones and the destruction of all they hold dear.
It is in this brutal world, inspired by ancient Rome, that Laia lives with her grandparents and older brother. The family ekes out an existence in the Empire’s impoverished backstreets. They do not challenge the Empire. They’ve seen what happens to those who do.
But when Laia’s brother is arrested for treason, Laia is forced to make a decision. In exchange for help from rebels who promise to rescue her brother, she will risk her life to spy for them from within the Empire’s greatest military academy.
There, Laia meets Elias, the school’s finest soldier—and secretly, its most unwilling. Elias wants only to be free of the tyranny he’s being trained to enforce. He and Laia will soon realize that their destinies are intertwined—and that their choices will change the fate of the Empire itself.

One of the most perfect books to find as a reader is one that sweeps you away. That immerses you so fully that you live and breathe the story. You laugh and weep with the characters and rage on their behalf as you tear through the pages, desperate to see how it ends.
This is one of those books.

I loved Elias and Laia for very different reasons. Elias’ chapters are packed with action and fraught with the dangers and horrors of the trials and Blackcliff. As a result some people will lean more towards favouring his chapters as they push the story along at a breath taking pace and catch you easily in his twisted world and the terrible decisions he must constantly face.
However Laia holds her own, just in a much quieter way. She is no hero, no super spy, no assassin trained for vengeance. She is just a girl who has lost too much and desperately craves safety and comfort. She is terrified and wants to run away from the danger. This is no chosen one, no lioness rampant. And yet. Her character growth and arc are incredible. She comes to terms with the life she has been forced into, she tries desperately to find her way through this impossible situation and as a result you feel for her. You want to protect her and help her. You cheer for her as she gradually finds her courage and pieces it together to form something she can use. Yes her chapters are quieter, the action less dizzying, but they are still fraught and full of fear and you come to know her character better in those stolen moments of fear in the darkness better than you could in any other situation.

I also loved the characters surrounding them, even those I loathed and feared. Fierce and wonderful Helene, Izzi and Cook – I loved these strong and clever woman, all fighting for the things they love and believe in. The female friendships in this book were a breath of fresh air, and I found them so compelling to read.

The world building was also incredibly strong. There was just the right amount of information, with enough gaps and holes to be filled in in later books. You got the feeling that this was only a small slice of the world. Admittedly an incredibly brutal one, but still only a piece. Because Laia and Elias are so enmeshed in this piece of the world it makes complete sense that we only see this, but I loved the whispers of a world outside of the corner we are shown, of the other places we might see. It made it clear that this is not a small world, that there are larger pieces at stake than just this, but that this part of the world is important, vital even to these two particularly. It was a brutal world, filled with horror and bloodshed, but whilst it was overwhelming it points it never felt ridiculous.

Everything felt like it had roots in our own worlds history, whilst then subverting and twisting it and adding in some dark fantastical elements. You get the sense that there is something inherently wrong, a darkness, a tipping balance that has reached the crucial point. It leaves the reader feeling a sense of wrongness, a prickling that all is now ok, a tension that is reaching the breaking point. We never find out the true picture and scale of what that is, but I love this slow build. It is a novel that takes its time whilst never dragging at all. It is brutal and non-stop, but it left me desperately wanting more – more of the characters, more of this world and answers, above all, answers. Not as with some novels, out of frustration and irritation, but simply because I have been pulled so thoroughly into this world and I want to know everything.

This novel was fantastic. A beautiful and horrifying start to what is sure to be an incredible series. It’s very dark, very twisted, but filled with gorgeous prose, electrifying action and complex characters. I loved it.

Catch up with the Harper Collins 'An Ember in the Ashes' tag #FantasyIRL in the first of two videos I'm doing for Bookish Brits here
Posted by Rosy at 08:30