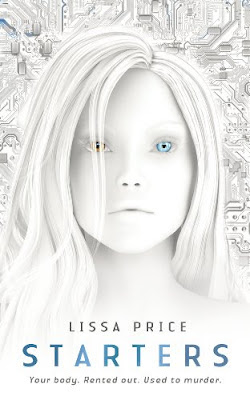 Huge thanks to Random House Children's Books for sending me a copy to review.

Callie lost her parents when the Spore Wars wiped out everyone between the ages of twenty and sixty. She and her little brother, Tyler, go on the run, living as squatters with their friend Michael and fighting off renegades who would kill them for a cookie. Callie's only hope is Prime Destinations, a disturbing place in Beverly Hills run by a mysterious figure known as the Old Man.
He hires teens to rent their bodies to Enders—seniors who want to be young again. Callie, desperate for the money that will keep her, Tyler, and Michael alive, agrees to be a donor. But the neurochip they place in Callie's head malfunctions and she wakes up in the life of her renter, living in her mansion, driving her cars, and going out with a senator's grandson. It feels almost like a fairy tale, until Callie discovers that her renter intends to do more than party—and that Prime Destinations' plans are more evil than Callie could ever have imagined. . .

I was left feeling a bit mixed after reading this book – there were some really great aspects, and some really not so great ones kind of jumbled together. I’m going to start with what peeved me and end on the good notes of what I liked, because I did really like this book, it just had quite a few flaws that I found difficult to get round.

I had several problems with the book that meant that I failed to truly engage with the story.
Firstly, the world building. This has so much potential but so much is left unexplained, and instead of making it mysterious and edgy it just left me irritated. All we know is that people live to 200, everyone between the ages of 20 and 60 are dead and were wiped out in the spore wars, and old people are evil. That’s it. There is no explanation, nothing, and I think I would have found the story a lot more convincing if there had actually been some concise explanations. I don’t need everything spelled out, but a little bit would be good. There were just too many plot holes that weren’t even tackled due to the lack of world explanations – for example why on earth are all old people made out to be evil with no backing or explanations? Why are children victimised and herded up? Why aren’t young people allowed to get jobs? None of these things really made sense and I felt a bit cheated by that.

Then we have the love triangle, which felt incredible forced and fake. It feels like it’s obligatory these days for a book to have a love triangle in it. This one had one half that was barely a half and a boy that she had an instantaneous connection with. I wouldn’t have been nearly so peeved if the two boys had served a function other than being a love interest, but that was it. However, by the end of the book it did suddenly all make sense and I stopped being so grumpy about the romance. I won’t explain further than that because I don’t want to ruin the story for anyone, but going into it, if you feel peeved by the love triangle, stick with it, there is a very good reason for it.

And then we have our heroine Callie who just seemed to drift through the book. There was no sense of urgency to engage me, no desperation or anything. She just seems to float along without really truly connecting or acting until very late on in the novel.

I think the reason I was so peeved with the above points is because this book had the potential to be an absolutely fantastic book. I mean look at that premise, the idea that you can have someone else rent your body is terrifying, and I don’t think that was really examined properly in the book. Thinking about the idea was enough to give me chills, but they were absent throughout the book, because there wasn’t that ick factor, the horror of it wasn’t thoroughly explored, and only really touched on at the end.


The writing was really good though, Price is definitely going to be an author to watch, I just wasn't as taken with this particular book as I thought Id be.

However, despite the problems I did still really enjoy this book. As I said, it’s a brilliant concept, and parts of it are executed brilliantly. I was really rooting for Callie by the end, and once the plot got going it really went for it.
I am really looking forward to seeing what happens next, and whether we get any development on the issues I’ve shared above, so when the sequel ‘Enders’ comes out I will be desperate to see how it plays out.

Don’t let my problems put you off reading it though, as I’ve said before, these are just my personal peeves whilst reading, and I’m curious to see how other people react and what they make of the book – so let me know if you agree or disagree!

This book is a good debut into the dystopian genre, and I found it to be a really interesting read. However there were a few issues that marred the experience for me, but ultimately I really enjoyed it and I’m looking forward to the sequel ‘Enders’.