Review: The Brides of Rollrock Island by Margo Lanagan 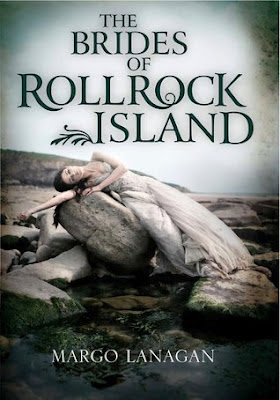 
Rollrock island is a lonely rock of gulls and waves, blunt fishermen and their homely wives. Life is hard for the families who must wring a poor living from the stormy seas. But Rollrock is also a place of magic - the scary, salty-real sort of magic that changes lives forever. Down on the windswept beach, where the seals lie in herds, the outcast sea witch Misskaella casts her spells - and brings forth girls from the sea - girls with long, pale limbs and faces of haunting innocence and loveliness - the most enchantingly lovely girls the fishermen of Rollrock have ever seen.
But magic always has its price. A fisherman may have and hold a sea bride, and tell himself that he is her master. But from his first look into those wide, questioning, liquid eyes, he will be just as transformed as she is. He will be equally ensnared. And in the end the witch will always have her payment.

This book was such a gorgeously haunting story that it’s stayed with me long after I finished reading it.

The writing is haunting and vivid, and creates such an atmospheric piece, similar to the feeling I felt whilst reading ‘The Scorpio Races’ by Maggie Stiefvater. It takes its time, slowly drawing out the tales over the span of several generations, but focusing around the intentions of Misskaella.

It was incredibly well done, because Lanagan takes her time to develop Misskaella into a sympathetic character that you cannot help but feel for, then branch out and show how others have treated her affects her attitude to those around her. It’s a tragic tale of human nature and the ability each person has to hurt others – but in this case, the repercussions when the person on the receiving end has the last laugh.

And just when you start to forget that she was once human and hurt and torn apart by others cruel words towards her, Lanagan twists it back and packs another gut wrenching punch that reminds you just how human and fragile she was at heart.

It’s a mixture of tales all rolled into one, all coming back to focus on the Seal Wives, the tragedy of Rollrock Island and Miskaella’s handiwork at getting her own back. We see the story from several view points; different generations at different times as we are led down the path of destruction with the Rollrock men, the slow, creeping rot that sets into the island, and the exploration of the island as a world of its own, the isolation of the setting as they cut themselves off further from the world.

We see boys grow up and turn into husbands and fall into the same patterns as those before them. We see women treated as objects of desire and ownership rather than people, and the slow rebuilding of a civilisation brought to the brink of destruction by those enchanted by the seal women.

Despite being a quick reader this book took me quite a while to get into and finish – the writing was quite dense and weighty, and despite only being just over three hundred pages long felt like a novel twice the length. That isn’t a criticism or point against it at all, it was just interesting to note how long I spent immersed in the world, and how much I enjoyed it.

I will admit that towards the end I did just want to finish it, because it is such a haunting and melancholy story that I did feel quite morose after several days dipping into the world, and wanted to move onto something lighter. But as I said, it was such a beautiful book that it outweighed any of the negatives.

It was an utterly heart breaking and moving piece of work that completely surprised me. It wasn’t what I expected at all, and yet it turned into one of the best reads so far this year. Moving, atmospheric and poignant – a look at how the actions of one person can shape people’s lives for generations.