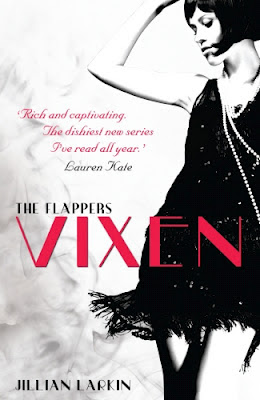 A huge thank you to Random House Children’s Books for sending me an early copy to review.

Jazz . . . Booze . . . Boys . . . It’s a dangerous combination.
Every girl wants what she can’t have. Seventeen-year-old Gloria Carmody wants the flapper lifestyle—and the bobbed hair, cigarettes, and music-filled nights that go with it. Now that she’s engaged to Sebastian Grey, scion of one of Chicago’s most powerful families, Gloria’s party days are over before they’ve even begun . . . or are they?
Clara Knowles, Gloria’s goody-two-shoes cousin, has arrived to make sure the high-society wedding comes off without a hitch—but Clara isn’t as lily-white as she appears. Seems she has some dirty little secrets of her own that she’ll do anything to keep hidden. . . .
Lorraine Dyer, Gloria’s social-climbing best friend, is tired of living in Gloria’s shadow. When Lorraine’s envy spills over into desperate spite, no one is safe. And someone’s going to be very sorry. . . .
From debut author Jillian Larkin, VIXEN is the first novel in the sexy, dangerous, and ridiculously romantic new series set in the Roaring Twenties . . . when anything goes.

It’s official, there are not enough books about flappers. Although ‘Vixen’ is such an awesome one, I may just keep re-reading it in the absence of any other fab 1920s books. Ever since watching the ‘Vampire Diaries’ episode where there are flashbacks to Chicago in the 1920s I’ve been desperate to read some good books set there, and Random House must have heard my wishes, because what did they send my way last weekend, but the fabulous début by Jillian Larkin and the first book in a brilliant new trilogy.

It was a fantastic book, with a style that reminded me strongly of Gossip Girl (which is no bad thing) and three fresh and distinctive heroines to guide us through the roaring twenties – jazz, booze, boys and speakeasies.

Having three narrators gives a brilliant scope to really explore the different aspects of the elite of Chicago. We have Gloria, straight A student and model ‘good girl’ as she discovers there’s more to life and a whole world out there beyond the four walls of her families mansion and the diamond rock on her engagement finger. I loved watching her try to balance the new dark and rebellious side with the life she already had, and for the most part succeeding – and the thrills and people that came along with it.

Then we have Clara, the bad girl turned good. I absolutely adored Clara she was funny, sassy and had a better idea of the world outside compared to the other two. I loved watching her grow into herself and discover a balance between her wild side and the good girl she was trying to crush down. In fact her story was perhaps the most intriguing as we discovered her past and watched her battle her demons to carve out a new life for herself.

And then we have Lorraine, who I will say I wasn’t all that fussed on. She was incredibly well written, and I found her utterly fascinating, but completely broken. She is the bad girl who has completely fallen onto the wrong side of the tracks – needy, petty and jealous I still felt for her, and she is still redeemable, but she left an unpleasant taste in my mouth every time she fell a little further.

The book explores the constraints of the time, the social dos and don’ts and was utterly fascinating. A brilliant blend of humour, heart wrenching emotion and fabulous characters, I loved it.

The research that must have gone into the book to produce such a vivid and detailed world is utterly mind boggling, but it’s so completely worth it as you are pulled straight into the world and experience every little detail.

I cannot wait to get my hands on the second book of the series and find out what happens next.  I fell in love with the characters (yes even Lorraine) and their stories were taken on such complex journeys with such surprising and fantastic conclusions in this book that I’m so excited to find out where Larkin takes us next.

Its’ an exceptionally strong debut from an author to watch out for, and a stunning new series for the rebel flapper girl in all of us.