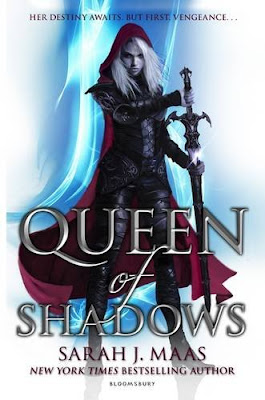 Everyone Celaena Sardothien loves has been taken from her. But she's at last returned to the empire—for vengeance, to rescue her once-glorious kingdom, and to confront the shadows of her past…
She will fight for her cousin, a warrior prepared to die just to see her again. She will fight for her friend, a young man trapped in an unspeakable prison. And she will fight for her people, enslaved to a brutal king and awaiting their lost queen's triumphant return.
Celaena’s epic journey has captured the hearts and imaginations of millions across the globe. This fourth volume will hold readers rapt as Celaena’s story builds to a passionate, agonizing crescendo that might just shatter her world.

I am CONFLICTED right now, because I genuinely don’t know how to rate this one. On the one hand, I barely slept for the three days I was reading it, I couldn’t physically put the book down. It was tense and incredible and SO STRESSFUL TO READ, but IMENSELY AWESOME. (And yes, all of these caps locks are warranted.)

But then there were parts that didn’t work as well for me that make me feel like it can’t be a full spectacular five star read. So I’m gonna try and reason it all out and see if I have a clearer idea at the end of the review. Ready?

I loved this book. I was caught from the first page and I really couldn’t put it down. There were a couple of (ill-timed) moments where real life intruded and I was forced to leave the book to go out, but whenever I had a spare moment, it was back in my hands. I was in a near constant state of stress and tense panic (seriously, just go look at my Goodreads status updates) and it was GLORIOUS.

I was so invested, so immersed in the story and it was so wonderful to just fall into it and escape real life for a while. It doesn’t happen with every book where I actually just forget everything else, and the books it does are my favourites, because I love getting lost in a book. I love being so desperate to return that I shove aside all other life and responsibilities and just burrow down with the story in my armchair.

I have loved seeing how Aelin has matured and grown over the course of the series, it’s been such a transformation and so good to watch, and see both her and those around her develop. Nowhere was that more apparent in this book than with her relationship with Lysandra which was pure gold. Their interactions, the friendship, and Lysandra herself. I have a new favourite, and boy is she sassy.

Lysandra heaved a sigh. "Oh, thank the gods. Now I can talk to someone about clothes without being asked how so-and-so would approve of it, or gobble down a box of chocolates without someone telling me I'd better watch my figure -- tell me you like chocolates. You do, right? I remember stealing a box from your room once when you were out killing someone. They were delicious."
Aelin waved a hand toward the boxes of goodies on the table. "You brought chocolate -- as far as I'm concerned, you're my new favourite person."

I also really love Manon. I know her sections have divided people – some love her, some really don’t and begrudge her the time she takes away from Aelin and co. But I happen to fall into the former camp. She’s fascinated me right from the start, so the additional time spent with her in this book made me extremely happy. Admittedly her sections were a lot slower and did drag the pacing down a bit, which was a shame, but I still really enjoyed this fresh perspective from such a different corner of the war and world.

Sure ok there were a few issues with pacing, which I will be addressing more in a moment when I talk about the issues, but on the whole OH WOW. Like I said, this book was tense, I could not put it down. Particularly in several of the really big everything is kicking off and how on earth can anyone survive any of this?! scenes. The writing was like a well oiled machine, flipping from character to character together to create one breath taking whole. I was manically tearing through pages to find out what would happen, and that is a sign of a truly incredible book.

Now let’s talk issues. First off, the one that is making an appearance in a lot of reviews at the moment, Chaol. What even happened?! Did he have a personality transplant between ‘Heir of Fire’ and this book?! The Chaol that appeared within these pages was not the Chaol of the last three books that I fell in love with, and I spent most of the book wanting to either smack him or shake him. He was an absolute arse, awful and horrible and mean and yeah sure he went through some bad things at the end of the last book, but REALLY, could he have been any different and worse?! So anytime he showed up and started snarking at Aelin, the book dropped down to a four star read.

It was also such a shame to see Chaol and Dorian reduced to such bit parts. I could understand it to a certain extent with Dorian, but they were both characters I really love in this series, so to see them reduced and butchered like that was really upsetting. And for what? To try and persuade people that this new shiny romance is the way to go? I was on board with this romance already, I didn’t need this character assassination to persuade me, and in fact I’m grumpier now as a result of that than I was before.

And the boys territorial, over protective attitude towards Aelin?! WHAT EVEN? Boys, she’s done just fine without you before now, and yes ok you’ll be very useful now but stop trying to restrict her and being complete and utter poops in the process. Sit in the corner and think about your attitudes!

My final issue was Elide. She was interesting, yes, but not interesting enough to warrant that much time being spent on her. It really dragged some of the story down and reduced the pace to a snails crawl, which considering how well paced I found the rest of the book was a shame. I think she has potential to be a really interesting player in the next instalment, but her introduction here was handled badly and proved to be a bit of a dead weight on the rest of the story.
So lots of truly brilliant awesome things, but then a handful of giant grumposaurus problems that really threw a spanner in my joy, adoration, and feverish reading. On the one hand, this book was amazing, on the other hand WHAT EVEN HAPPENED IN SOME OF THAT.

You see my problem and conflict?
I think I’m just going to have to put this as a four star read and consider it to be four and a half really.

This is a truly incredible instalment in the series. It won’t be for everyone, and the problems I’ve talked about, whilst grumps for me, will probably be enough to put some people off this series for good. However I still loved the book, it was a fantastic read, brilliantly written on the whole and more than satisfying. My love for this series is alive and well and I cannot wait for the next book – it’s going to be a long year. Now I just need to not spoil anything whilst Husband finishes reading it…