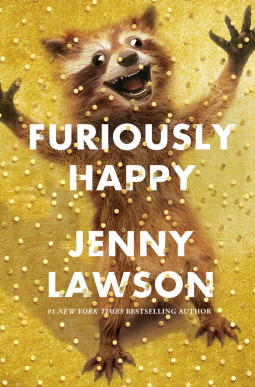 In “Let’s Pretend This Never Happened”, Jenny Lawson baffled readers with stories about growing up the daughter of a taxidermist. In her new book “Furiously Happy”, Jenny explores her lifelong battle with mental illness. A hysterical, ridiculous book about crippling depression and anxiety? That sounds like a terrible idea. And terrible ideas are what Jenny does best.
According to Jenny: "Some people might think that being 'furiously happy' is just an excuse to be stupid and irresponsible and invite a herd of kangaroos over to your house without telling your husband first because you suspect he would say no since he's never particularly liked kangaroos. And that would be ridiculous because no one would invite a herd of kangaroos into their house. Two is the limit. I speak from personal experience. My husband says that none is the new limit. I say he should have been clearer about that before I rented all those kangaroos."
"Most of my favorite people are dangerously fucked-up but you'd never guess because we've learned to bare it so honestly that it becomes the new normal. Like John Hughes wrote in The Breakfast Club, 'We're all pretty bizarre. Some of us are just better at hiding it.' Except go back and cross out the word 'hiding.'"
Jenny's first book “Let’s Pretend This Never Happened”, was ostensibly about family, but deep down it was about celebrating your own weirdness. “Furiously Happy” is a book about mental illness, but under the surface it's about embracing joy in fantastic and outrageous ways-and who doesn't need a bit more of that?

I adored Jenny’s first book. I frequently had to go out to my car to read it on my lunch break because I was laughing so hard I was ‘disturbing my co-workers’. I have never laughed so hard whilst reading before, and it was truly a glorious experience and an amazing read. So it was a no brainer that I would, of course, be picking up any further books Jenny wrote, and as soon as I saw the cover and title I knew I would be in for a treat.

Note to self: Don’t read this whilst in public. I got odd looks from laughing so hard and then nearly crying on the metro, in an airport (whilst reading the section about flying and airports, it was fortuitous timing and made everything ten times funnier) on the plane and then on a train. Several trains in fact. I had odd looks from strangers and my husband, who got increasingly irate everytime I tried to share another funny bit, because, let’s face it, that was most of the book, and ended up yelling that NO MORE, HE WANTED TO READ THE BOOK FOR HIMSELF. (Spoilsport)

Don’t be fooled though, because yes, there is plenty of laughter and merriment and general insanity (raccoon rodeo anyone?) but there are also much more serious sections which in turns punched me straight in the feels, made me nod along and go YES, SOMEONE ELSE UNDERSTANDS and sob, and also pass the book over to Husband with the instructions to read this because Jenny explains it so much better than I ever could.

It is outrageous and funny and heartfelt and full of poignant moments and good advice. In short, Jenny has done the impossible and created a truly brilliant blend of humour and seriousness tackling life with mental illness. It’s still so much of a taboo to discuss mental illness and Jenny throws all of that out the window and does a truly spectacular job of talking about it in ways that will both appeal to sufferers and those hoping to understand more. I’m bulk ordering many copies of this book to go to various people for Christmas because it is brilliant.

Plus look at that cover. That cover alone should be giving you a good idea of what’s waiting for you inside – insanity and hilarity written by a truly incredible writer.