Review: As Black as Ebony by Salla Simukka 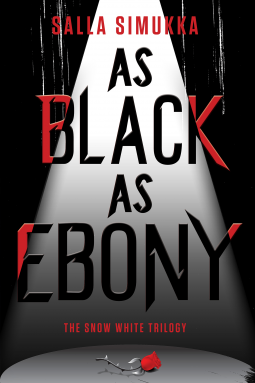 After a harrowing summer in Prague, Lumikki Andersson is back in Finland at her prestigious art school, concentrating on graduation. She lands the lead role in the school’s modern-day adaptation of “Snow White” and finds herself facing a new distraction—Sampsa, the boy playing the role of the huntsman, who has an undeniable allure that makes Lumikki conflicted about what, and who, she wants.
As Lumikki starts falling into something more than just her role on stage, a shadow is cast over the production when she begins receiving creepily obsessive love notes. Lumikki can’t ignore the increasingly hostile tone of her admirer’s messages, and when the stalker threatens mass violence at the play’s premiere, Lumikki knows she must discover who is behind the menace and stop the person at all costs.
With a foe who has a heart as black as ebony, does Lumikki have any hope of saving those she loves?

It’s a well-known fact that I absolutely loved the first book in this trilogy ‘As Red As Blood’. It was terrifying, engrossing, tense and brilliantly paced – the sort of book that you had to read in one nail biting sitting or risk losing your mind. Then I stormed straight through the second book, and whilst it didn’t pull me in in quite the same way as the first, it was filled with Simukka’s trade mark brevity and twisting plot threads and was still a fantastic read. So I was curious as to how the third book in the trilogy would finish Lumikki’s story off, and whether it would lean more towards the brilliance of the first book or continue in the same vein as the second.

Actually it ended up being somewhere in the middle. It had all of the terror and tension of the first book, but it felt a little too short, as though the climax happened far too soon, just as everything was building up nicely.

However, there was a lot that really worked well in this finale. The translation was much smoother for this book. All three books are set in Finland and the original language is Finnish, so the translation into English has been a little shaky at times in the first two books. There are still a couple of odd moments, but on the whole the overall feeling is a much smoother and more dynamic narrative that feels closer to how the original was written.

Simukka’s writing style is refreshing to read. She has a way with words, and a sparseness to her prose which cut the book down to the absolute minimum of fuss – like Lumikki herself. It draws you into the story and delivers emotional blows and reveals hidden depths that wouldn’t have been possible with a more verbose and flowery narrative. It’s sparse, and it works beautifully.

This book was also a lot more focussed, which definitely helped to hone the narrative. Whilst the first and second book had several interlocking narratives, with same narrators known to the reader and others hidden until the end, this book simply offered Lumikki’s and her unknown stalker. It meant that the story was a lot less confusing and we’re less distracted by being confused about different narrators who we’re unsure about.

My biggest problem was the length. All three books have been very short, but this is by far the shortest and as a result you get a wonderful build up but then a very sudden climax. ‘Hey look, here’s the stalker, and now they’ve been defeated, everyone go home.’ It just felt very abrupt, I wanted more. There had been such a deliciously terrifying build up, it just felt too sudden and out of the blue that it all came together and was resolved so quickly.

However despite that draw back, the book is still a fantastic read and a very satisfying conclusion to the series. You could easily read ‘As Red as Blood’ as a standalone book, but I have loved coming back to Lumikki over the course of the following two books and slowly unpacking her story and watching her piece herself and her life together. If you’re looking for a fast paced thriller, these are the books for you. Or if you fancy trying a YA book that breaks the trends and is set in Finland and translated into English then I recommend this even more. It was so refreshing to read something so wildly different from the usual YA fare, and this offered a more than satisfying conclusion.