Review: Every Breath by Ellie Marney 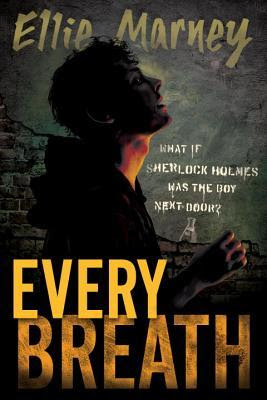 When James Mycroft drags Rachel Watts off on a night mission to the Melbourne Zoo, the last thing she expects to find is the mutilated body of Homeless Dave, one of Mycroft's numerous eccentric friends. But Mycroft's passion for forensics leads him to realize that something about the scene isn't right--and he wants Watts to help him investigate the murder.
While Watts battles her attraction to bad-boy Mycroft, he's busy getting himself expelled and clashing with the police, becoming murder suspect number one. When Watts and Mycroft unknowingly reveal too much to the cold-blooded killer, they find themselves in the lion's den--literally. A trip to the zoo will never have quite the same meaning to Rachel Watts again...

This book fell onto my radar thanks to Angie’s (Angieville) and Cait’s (Paper Fury) reviews and both of them were so complimentary and effusive in their praise that I simply had to get hold of a copy for myself, so this one is totally on you two. And thankfully this book more than lived up to all those high expectations I went in it with.

I am a big fan of the BBC Sherlock – I love the way the stories translate to a modern day setting, so the idea of another modern day exploration of Sherlock was an excellent starting point. Add in that ‘Watson’ is a girl called Rachel Watts, ‘Holmes’ is a teenage genius who lives two doors down called James Mycroft, the fact that their chemistry and friendship is off the charts and it’s both brilliant and set in Australia and quite frankly: be still my beating heart.
(Tiny side note of glee for fans of the original books, I giggled like a little crazed thing whenever anyone called Watts Rache, because Study in Scarlet. Detail.)

This book is genius, basically. Watts and Mycroft are one of my favourite pairings in fiction ever. Which is a truly incredible feat. Their friendship is such a strong foundation and they work so brilliantly together that I would have been happy were they only ever friends. However the chemistry between them is truly electric, and I absolutely adored the slow build of tension between them throughout the story. They just work so well together. Watts is neither stupid nor bumbling. She may not put the pieces together at the same speed as Mycroft (really, who could?) but she’s methodical and sharp and attentive and is an equal half of the partnership rather than a documenter of Mycroft’s genius.

Whilst there is plenty of attention paid to Mycroft and his delectable brilliance (yes I have a fiction crush, how did you guess?) the real heart and soul of the story is Watts. She is such an incredible protagonist. Told from her point of view the story is very firmly grounded with her at the centre, and she holds firm against the overwhelming tidal wave that is Mycroft. Some characters would get lost against his brightness, but she is grounded and sure of herself and she provides the heart, soul and humour that turns this from a good book into a brilliant book.

I also loved that this isn’t a Sherlock and John story, they are never playing at being them, there are plenty of references to the Conan Doyle stories. It’s played as simply an amusing coincidence rather than anything else and it works brilliantly. It allows the story and characters the space to breathe and become their own, whilst still giving a sly wink and nod at Conan Doyle’s characters – the perfect blend.

The murder mystery is also brilliantly handled, so that whilst they are two teenagers sleuthing around trying to fit the pieces together and catch the murderer, it never felt ridiculous or unrealistic. The motives and thought process behind it all made sense. I never once questioned it or felt that it was ridiculous what they were trying to do. And I loved the varied reactions of the adults around them when confronted with their super sleuthing, plus their general awesome pairing.

Admittedly I did know who the murderer was as soon as they were introduced – I think I may have read one too many murder mysteries that I can now spot them a mile away. But for once I wasn’t frustrated by the knowledge, the story was so good that I just got swept up in it, and the thrill of the chase and desperate climax were superb.


It’s a brilliant debut – wonderfully paced, with two incredibly real and vivid characters who tugged me into their world and brought me racing breathlessly after the murderer with them. I fell for Watts and Mycroft completely and I cannot wait to see where they go next in the sequel “Every Word”.