The Vampire Diaries Review: The Five

Spoilers below for the episode!

So this week’s Vampire Diaries threw me for a loop. I didn’t quite know what to make of it to start with, but it’s growing on me. That could just be Damon sexy dancing, that’s growing on me too. Does anyone else just imagine Damon’s life pre return to Mystic Falls being one giant frat party? Just me? It didn’t quite pack the emotional high stakes punch that I was expecting, but it crammed in a lot of new mythology that sets us up brilliantly for the rest of the season, and I’m really curious to see where the show goes from here. But in the mean time, here are my five favourite things about last night's episode! 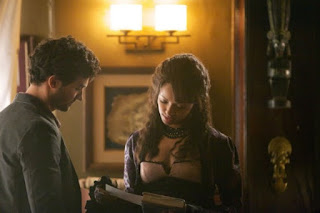 Starting at number five is the new Professor. I don’t trust the Professor guy – he hangs out at frat parties? Really?
But it’ll be great to see Bonnie have a good storyline, and maybe, just maybe some character development? That would be nice… She feels, of all the characters, the most stagnant, and I’d really like to see more of her coming into her own and discovering a bit more of her powers, and again, maybe learning what the fun word means. So if the new Professor helps with that, I am all for it.
However, he is shady and he has weird connections, so whilst I loved his introduction, I am not convinced that I like him yet.

Elijah! Do I really need to say any more than that?! I’m just so happy to see him back again! I want him to come and knock some sense into everyone please. But any appearance by Elijah, even if it is on a bad wig day, is a good thing as far as I’m concerned. 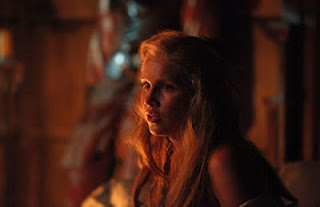 The cure. Now I’ll admit, when this first came up watching it live, my reaction was closer to Thomas Galvin’s tweet at the time (for whichI will link but not post due to content…) but then I slept on it and I thought about it, and I’ve come to terms with it, and I actually kind of like it.
There is a cure in the books, so there is always that element to play with, but more than that, I like it because it introduces this big jigsaw piece of mythology to the world, and it brings in the conflict.
Now if it works and we start turning vampires back human again I will go absolutely mental. (Again, Thomas captures my thoughts perfectly.) But as a concept, I really like it.
It brings in this desperate denial search for Stefan, whilst Damon is actually trying to help her adjust to the reality, and it brings in a conflict for the audience. I personally really don’t want to see Elena turned back to human, I’m really liking watching her transition and her slow growth and development, and if we scupper all that in favour of turning her back human I will not be pleased. But, as an audience the quest for answers means we will be invested, we want to know if they find it, if they will use it, if there will be any hideous side effects or price to pay for using it. But I am also intrigued because of Season 2 and the sun and the moon curse. No one was staggeringly happy when that was introduced, and then we find out two thirds of the way through the season that it was a fake one made up by Klaus to bring the doppelganger out. Genius. So I am not taking this curse at face value yet, but writers, you have my attention, I’m listening, now bring me in. 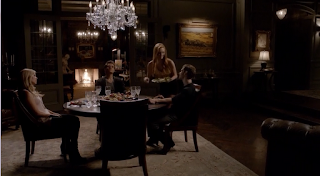 Klaus: “Rebekah love, eat your veggies.”
Rebekah: “I’m not eating until you apologise.”
Klaus: “For which indiscretion? There have been so many.”
Rebekah: “You broke my neck!”
Klaus: “You threw away Elena’s blood so I can’t make any more hybrids.”
Rebekah: “You took me for granted!”
Klaus: “That’s what big brother’s do sweetheart.”
Stefan: “Let me just name the million other people I’d rather be having dinner with right now…”
Oh dear god I loved this. If there is one thing TVD excels at, it is strange dinner parties, and I LOVE when they throw them. Klaus is a partciularly fantastic host. I loved this whole storyline. Firstly, Stefan is so much more interesting when he’s not with Elena, I love the snark that comes out to play, and I love his dynamic with these two given all the history they have.
I loved the very normal sibling conversation and rivalry coming out to play, and how Stefan’s been caught up in it. And most of all I loved Rebekah. She’s been a fantastic character right from the start, and Holt has played her to perfection – mean but with a vulnerable streak a mile wide that makes the audience still sympathise with her. And that was out in spades in this episode. She broke my heart in that final scene, first with Stefan and then with Klaus. 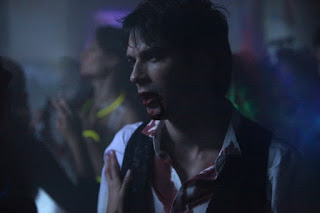 That frat party. I loved seeing Elena let loose and have a little bit of fun. I loved seeing the sexy bad ass Damon we haven’t seen as much of over the last couple of seasons. But most of all I loved the two of them dancing and having fun and getting flirty. It was fun, it was sexy, and it was so good to see Elena come down a little bit off the Stefan high horse.
I actually kind of liked how the scene ended up, if they’d ended up kissing or anything that would have completely undermined the relationship, and besides no matter how high on blood she is, Elena doesn’t strike me as the cheating kind. But I love that she is coming to Damon, she’s being flirty right back, she wants his help and she is starting to recognise that she is a lot more like him than she’d like to admit. Similarly, if Elena hadn’t had an attack of the guilty conscience that would have been too much of a character shift too quickly. What I love is that the writers are showing these moments of her, the walls are coming down and she is slowly starting to lose it. Yes it’s a slow process, but part of the awesomeness of it is the sheer nerve wrenching anticipation of it all. Similarly to her and Damon, eventually it will happen, and I’m enjoying how deliciously tantalising these moments are becoming. Elena’s breaking apart, and it’s fascinating to watch, and I doubt it’s going to be Stefan ultimately who picks up the pieces.

So that was me. What did you make of the episode? Excited for the new mythology, or horrified there might be a cure? And will Connor finally lose it next week after being held in the red room of pain? Answer in the comments below!
Posted by Rosy at 18:04