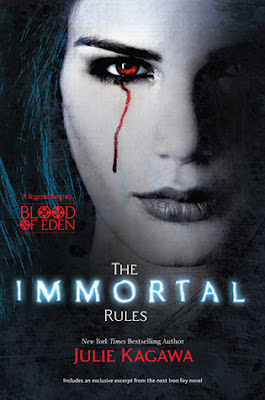 Welcome to Day 10 of The Immortal Rules Blog Tour. Don’t forget to check out all the other stops on the tour – listed on the banner to the left!

Huge thanks to Becky at Mira for sending me a copy to review!

In a future world, Vampires reign. Humans are blood cattle. And one girl will search for the key to save humanity.
Allison Sekemoto survives in the Fringe, the outermost circle of a vampire city. By day, she and her crew scavenge for food. By night, any one of them could be eaten.
Some days, all that drives Allie is her hatred of them. The vampires who keep humans as blood cattle. Until the night Allie herself is attacked—and given the ultimate choice. Die… or become one of the monsters.
Faced with her own mortality, Allie becomes what she despises most. To survive, she must learn the rules of being immortal, including the most important: go long enough without human blood, and you will go mad.
Then Allie is forced to flee into the unknown, outside her city walls. There she joins a ragged band of humans who are seeking a legend—a possible cure to the disease that killed off most of humankind and created the rabids, the mindless creatures who threaten humans and vampires alike.
But it isn't easy to pass for human. Especially not around Zeke, who might see past the monster inside her. And Allie soon must decide what—and who—is worth dying for.

I was really excited to see what Julie did next following the monumental success of her Iron Fey series, and sticking the with supernatural but making the leap to Vampires seemed like an interesting idea. I liked the slight twist on all of the vampire fiction we’ve been getting recently – having them not as something desirable and fantastic, but as a menacing overlord who have enslaved humanity. Much more my cup of tea given my current mood!

The book took a while to get going. In part this was because of the characters. All of the introductory characters within the first hundred pages or so really didn’t do it for me. None of them had any likeable traits or personalities and I found myself not really rooting for any of their survivals – not a great start particularly as one of these was the heroine. I just found her to be too cold, too calculating, and yes that was needed to survive in a world like this one, but at the same time the reader does need something to latch on to, to identify with and want to go on this journey with the character and see them through to the end, and I didn’t find that with Allison for quite some time.

The other thing that slowed me down was the prose. It’s very wordy, a vast amount of description – which is needed to set up this crumbling world, but at the same time it slows the story down at the beginning. Despite the ever present tension and looming menace I didn’t really feel that there was anything truly driving the story for the first part, and I like to have a drive established pretty early on – and by drive I mean something more than survival when I haven’t taken to the main character yet.

However, the slightly faulty start was soon forgotten as we emerged into the epic scope of the bulk of the novel. Kagawa has proven herself a master at supernatural, at world building and plots and at creating involving and terrifying stories. And this is by no means an exception.

Fans of hers will love this new series with a strong and determined (once we got to know her a little better!) heroine at its heart and an interesting new premise for this series. And those who haven’t yet discovered her writing? I think this is potentially her best novel yet, and is most definitely a great one to welcome you to her writing.

The novel is dark and terrifying, and as I’ve said, a fantastic chance to see vampires as the more feared and terrifying versions of themselves. Kagawa truly excels at world building, offering up enough information without going overboard and slotting it into the novel so that gradually the world starts to piece together as we learn along with Allie. Once I got past my initial hang ups with Allie and learned more about her character she turned into a truly fantastic heroine. Strong, brave and desperate to help others and put them before herself despite her survival instincts trying to save herself first, she really was a fantastic heroine to journey through this novel with. It’s a brilliant book, not just supernatural with a coming of age story at its heart, but also takes a look at acceptance and growth and I loved watching Allie come to terms with her new life and grow into a strong and fearless warrior. It was also great to have a romance that didn’t overtake the rest of the story, to have a slow burn that didn’t eclipse everything else and leaves plenty of room for development in the next book.

I’m really looking forward to seeing where Kagawa goes from here, which of the characters we get to see more of and where Allie’s journey takes her next.
A fantastic book full of brilliant writing, dark suspense and a compellingly real heroine at its heart, I highly recommend this book.