Huge thanks to Mira Ink for sending me a copy to review! 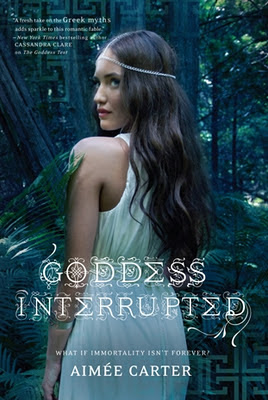 Kate Winters has won immortality. But if she wants a life with Henry in the Underworld, she'll have to fight for it. Becoming immortal wasn't supposed to be the easy part. Though Kate is about to be crowned Queen of the Underworld, she's as isolated as ever. And despite her growing love for Henry, ruler of the Underworld, he's becoming ever more distant and secretive. Then, in the midst of Kate's coronation, Henry is abducted by the only being powerful enough to kill him: the King of the Titans. As the other gods prepare for a war that could end them all, it is up to Kate to save Henry from the depths of Tartarus. But in order to navigate the endless caverns of the Underworld, Kate must enlist the help of the one person whom she would really rather not meet. Henry's first wife, Persephone.

I really enjoyed the first book in the series ‘The Goddess Test’ – it was a fresh idea with a brilliant twist on the greek Gods and mythology, and it had a really strong heroine at its heart.
But after reading ‘Goddess Interrupted’ I really want to know what happened to that strong heroine…

In the first book Kate knew who she was – she loved hard and deeply, and she worked to protect those around her. Yes she was flawed, but essentially she was a strong, really great heroine for the story. We come back to her at the start of her next six months with Henry, after spending the summer exploring Greece with James (in a purely platonic way) and right from the word go, she is needy, desperate, completely mood swingy ricocheting between being desperate to be what Henry needs and yelling at him for not loving her enough, and spends half the book crying. I wish I was exaggerating.

It was just so tragic, because the first book had built such a good base, and yes there was a fabulous plot in place in the second book, but it never really got a chance to shine because of the histrionics and whining that was dragging every page down with Kate’s battle against doubt and self worth. I mean yes, ok, I understood why she was having doubts, and I understood why she was desperate to see some sign of affection from Henry, but it was tackled in such a bad way that it made me read a lot of her inner monologue and whining.

And I was so upset, because I loved  Kate in the first book. And I wanted to know where on earth that version of Kate had gone. This new version of Kate didn’t know who she was anymore, she couldn’t seem to exist without Henry’s approval and eternal devotion and all the rational and empathy we saw from her in the first book had vanished. I think I probably wouldn’t have had such a strong reaction to this book if it hadn’t been that Kate was effectively trailing round after Henry wailing that he wasn’t showing her enough love – any heroine who bases her entire worth on a boys opinion of her needs shaking in my eyes, and it was particularly hard to read after she had been such a strong character in the first book.And really, Henry wasn’t much better. But then he’s always been the silent brooding type, so it wasn’t quite so obvious with him.

I loved the ideas behind the plot, but I didn’t really feel that it was executed particularly well. Instead of involving Kate in any of their plans and strategies, she ends up spending most of the time getting in people’s way and curled up in bed crying. I wanted her strong, I wanted her proactive, I wanted her demanding to be helpful and for someone to give her some help with learning about being an immortal.

I felt cheated. Because Kate wasn’t involved in a lot of it, we never got to see any of the big fight scenes, we never saw anything other than her moping and wandering around. Even her one chance to be proactive wasn’t actually as big and momentous as it could have been.  It all felt a little bit flimsy and like the slightest puff of wind would blow the whole thing apart. And I hate feeling like that about a book that I was expecting to love. And to make matters worse, the writing that I loved in book one had all but vanished in book two. Along with Kate's dramatics was a book stuffed with clichés so you couldn't get through a page without tripping over one. Honestly? I wanted to put the book down and howl I was so disappointed.

I really hope that the next book brings it all back together again. I want to see more of the Kate we knew in book one, I want to see a stronger plot and a better use of the characters – all of the standing around muttering about how the world was going to end with very few explanations became repetitive and frustrating by the end, and I really hope that after the build up, the explosion that is building for the third is going to live up to expectations.
In the meantime I’m going to go back and re-read book one and pretend I didn’t just read the second book.