Review: Scarlet by A. C. Gaughen 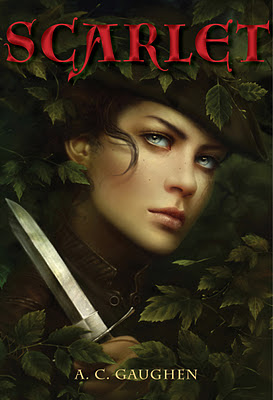 
Posing as one of Robin Hood’s thieves to avoid the wrath of the evil Thief Taker Lord Gisbourne, Scarlet has kept her identity secret from all of Nottinghamshire. Only the Hood and his band know the truth: the agile thief posing as a whip of a boy is actually a fearless young woman with a secret past. Helping the people of Nottingham outwit the corrupt Sheriff of Nottingham could cost Scarlet her life as Gisbourne closes in. It’s only her fierce loyalty to Robin—whose quick smiles and sharp temper have the rare power to unsettle her—that keeps Scarlet going and makes this fight worth dying for.

I am a sucker when it comes to a good Robin Hood story, and when I saw Angie’s reviewof ‘Scarlet’ I was absolutely desperate to read it. But then there’s always a worry when it comes to reinterpretations of the Hood legend, that they’ve taken it too far in the wrong direction. Although after watching ‘Robin Hood Men in Tights’ I’m not so sure there is a wrong direction anymore… Anyway, I was a little bit wary going in, but I really shouldn’t have worried, this was one of the best re-tellings I’ve had the pleasure of reading in a long time.

The plot combines enough of the original legend to make it feel authentic, with just enough new twists and turns for the tale to be truly original as well. And there are a host of familiar faces that make it into a true Robin Hood tale.

I absolutely adore Scarlet. She’s got such a distinctive voice, a no-nonsense attitude and complete undying devotion to Rob and the boys. She’s tough and can take a punch as well as any man, but is softer and admits that just a touch from Robin can render her breathless and speechless. She was the perfect blend of soft and hard, a truly believable and fantastic heroine that I couldn’t help but fall in love with and admire.

You want her to win, to succeed, and root for her even when things seem completely hopeless. Her backstory was fantastic, and threw several shockers that had me gasping aloud throughout the book. She is a beautiful blend of characters from the original legends, but makes it entirely her own.

And the other boys – oh Rob, you are just as dreamy as I always imagined. And John turned out to be quite the charmer as well. It was a smaller band than I imagined, but all the characters were brought to life so vividly that it really didn’t matter. You get to know each of them, their backstories and their personalities in a way that secondary characters can often miss out on.

The writing was gorgeous, Scar’s voice was absolutely perfect, taking you through the tale along with her, and the research involved must have been enormous because it truly felt like I’d been picked up and dumped in the middle of the twelfth century in the middle of Sherwood Forest.

It was real, hard, sometimes impossibly heart breaking, and utterly fabulous. I don’t want to give any more away, because it’s a truly fantastic read.

After finishing I just wanted to go straight back into the world and read it all over again – which considering I was having the same feelings about the 1920s flappers book I read just before Scarlet, made for some pretty interesting dreams…

This book completely swept me away. Definitely a must read for fans of Robin Hood, but anyone who loves a kick ass heroine and a brilliant plot would love this. One of my favourite books of the year so far.