Review: Every Word by Ellie Marney 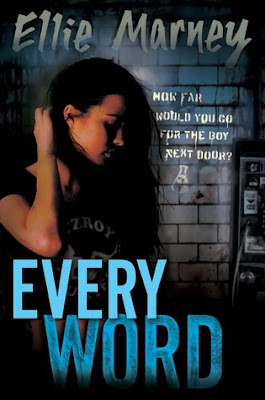 James Mycroft has just left for London to investigate a car accident similar to the one that killed his parents seven years ago...without saying goodbye to Rachel Watts, his 'partner in crime'.
Rachel is furious and worried about his strange behaviour - not that Mycroft's ever exactly normal, but London is the scene of so many of his nightmares. So Rachel jumps on a plane to follow him...and lands straight in a whole storm of trouble.
The theft of a copy of Shakespeare's First Folio, the possible murder of a rare books conservator, and the deaths of Mycroft's parents...Can Watts help Mycroft make sense of the three events - or will she lose him forever?
Sparks fly when Watts and Mycroft reunite in this second sophisticated thriller about the teen sleuthing duo.

Earlier this year I read the first book in this trilogy ‘Every Breath’ and was blown away by the sheer brilliance. You would think then that having loved the book so much I would have leaped straight into the second – that would have been logical I hear you cry. Instead I decided to flail and stress that the brilliance of the first book wouldn’t be caught quite so spectacularly in the second thus destroying my hopes and dreams and leaving me a sobbing mess for the brilliance that might have been. So I waited, and I procrastinated, and I read other books.

And then the two wonderful people who got me onto this series in the first place read the second book and both of them were effusive in their praise of how good it was, so I finally told the panicked voices in my head to shut up, and FINALLY I read it.

And you know what? IT WAS SO GOOD.

Never did I think I would be so smitten with a teenage take on the Holmes and Watson set up, but Ellie not only writes believable and fascinatingly complex characters, she puts them into fantastic, well-paced plots and then she hurts my babies. But it is so good and so well done that I don’t care about the terror and the weeping and the general pain and angst that occurred for me whilst reading it. Basically Ellie can rip my heart out with brilliant writing and I will simply beg her for more.

Everything that I loved about the first book was back in abundance – fast paced and engrossing plot, steamy sexual tension between the two leads, and clever workings of details from the various other incarnations of Holmes we’ve seen. Ellie is astoundingly talented at weaving in little details (some more obvious than others) and leaving the reader to notice them. It’s cleverly done and a huge source of satisfaction whilst reading to pick up on them.

This book felt much darker than the first, Ellie isn’t afraid to really hurt Mycroft and Rache, and some of the darkest scenes were horrifyingly realistic and believable. I stormed through the book, feverishly ripping through the pages because I simply had to know what happened next. I couldn’t put it down.

The writing is fantastic, and it was wonderful to have a change of setting and have the majority of this book set in London. Ellie really captures the feel of the city, and so many little pieces of England and British culture that help you to feel like you’re really there. It was also great to see Mycroft in his home element, to see him slide from boy next door into an English boy – as Rachel notes, suddenly you don’t just know that he’s English you see it. See how he fits in in these surroundings much more smoothly than he does in Australia, and it’s subtle and incredibly well done. We uncover a lot more of Mycroft’s backstory, and I loved having each new piece of information trickle out, seeing it through the filter of Rachel’s eyes and thoughts as she tries to deal not only with the murder case, but Mycroft’s rapid tailspin as events unfold. Rache is such a fantastic protagonist and she really holds her own against Mycroft, no easy feat when he is such a vibrant and fascinating character who is ever present, infusing every page, even when he’s halfway across the world.

I also love, as I did with the first book, that you never forget that these are two teenagers. There are no moments where you want to tear at your hair in frustration because adults are incompetent and Mycroft and Rache are doing things that no teen would realistically do. Yes they are put into extreme circumstances and as a result they’re forced to adapt and do things they otherwise wouldn’t, but it never felt ridiculous or overblown – something that a lot of YA novels never quite manage to achieve.

All in all this is a fantastic second instalment in the trilogy. It more than lives up to the high expectations set by the first book and has left me desperate to get straight into the third book. I love this series, I love Ellie’s writing, but most of all I adore Mycroft and Rache. If you’ve read the first book and are hesitant about getting into the second, don’t be. And if you haven’t yet discovered this series, do so now. Sherlock as the boy next door? Be still my beating heart.