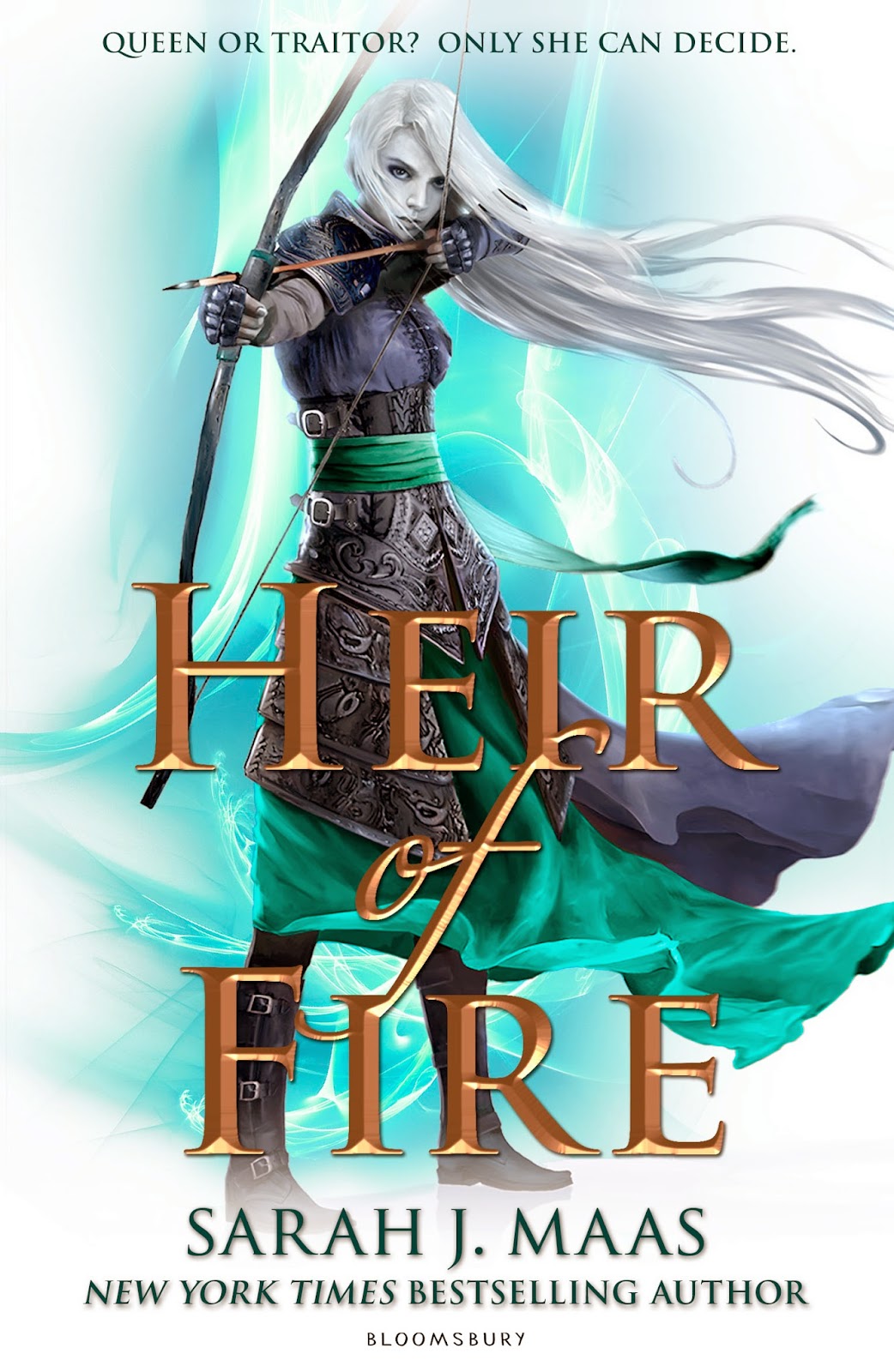 This review is spoiler free!

Lost and broken, Celaena Sardothien’s only thought is to avenge the savage death of her dearest friend: as the King of Adarlan’s Assassin, she is bound to serve this tyrant, but he will pay for what he did. Any hope Celaena has of destroying the king lies in answers to be found in Wendlyn. Sacrificing his future, Chaol, the Captain of the King’s Guard, has sent Celaena there to protect her, but her darkest demons lay in that same place. If she can overcome them, she will be Adarlan’s biggest threat – and his own toughest enemy.
While Celaena learns of her true destiny, and the eyes of Erilea are on Wendlyn, a brutal and beastly force is preparing to take to the skies. Will Celaena find the strength not only to win her own battles, but to fight a war that could pit her loyalties to her own people against those she has grown to love?

When I got my hands on an early copy of ‘Heir of Fire’ I couldn’t wait to get started. It was just a shame that around five pages in I realized that most of the events of the previous book was nothing but a hazy memory and if I wanted any clue what was happening I needed to go back and start at the beginning.

So I’ve spent and otherwise stressful few weeks happily ensconced in Celaena’s world, reliving her battle to become the King’s Champion, her slow uncovering of the rebels plots, the devastation and loss and the shock of revelations at the end of ‘Crown of Midnight’. It was quite the emotional rollercoaster, and I was expecting that pace to be maintained, thinking that this was the last book in the series. Thankfully I was wrong, and there are plenty of stories waiting for another book to tell them, but it meant that I spent a good portion of the book waiting for the pace to kick up a notch as it would in the final book in a series, and being disappointed.

Once I got around the fact that I was being an idiot and doing myself out of more books (Sarah has stated on her website that she’s always seen the series as a 6 book one.) I settled in and enjoyed the book.

This book was much slower than the first two, Celaena has taken quite the emotional beating by this point and it takes a long, long time for her to try and piece herself back together. There were a few points where her constant misery and self blame became a little bit much, but on the whole it was handled really well and it was so good to watch her try and reconcile all the parts of herself into one flawed whole.

Whilst Celaena is off learning and growing away from Rifthold, we still get peaks back to how everyone left behind is faring. Short answer? Terribly. The events of the last book have shaken everyone and their various relationships beyond repair, so it was a much darker book, no one trusting anyone and everyone feeling lost and isolated. The good part is that the treachery of the King is finally being recognised and more people are figuring out what he’s done, so there is a better chance of managing to right all the wrong’s. But watching everyone stumble around trying to deal with things on their own was truly heart breaking.

We are also introduced to a host of new characters which fleshed out the book and really gave more meat to what was once solely Celaena’s story. Rowan, a fae prince was one of my particular favourites, as was Manon another Ironteeth witch, and oh boy the witches. They were a fantastic addition to the story. I really loved all of Manon’s sections, which tie in beautifully with showing us what the King is planning next and pick up the thread that was introduced in the last book with Baba Yellowlegs. They are incredible, and I am so excited to see where that story takes us in the next book.

A lot of holes and questions that were raised are now being filled in, we’re given a lot of back story, particularly Celaena’s which was great to have. Maas has left it just long enough to really whet our appetites without drawing it so long that we’re frustrated, and she really should be commended for the brilliant pacing of each book, but also the series as a whole.

All in all this latest installment is a fantastic addition to the series. It expands the world, raises the stakes, and sets the bar even higher with a brilliant climax of an ending for the next book. Fans of the series will be thrilled with this book, and those who haven’t yet found the series, go out and get yourself a copy of ‘Throne of Glass’ and get on board.