Oh Reign – let’s get one thing straight, you are no longer just a guilty pleasure to me, you are officially one of the best shows on television. (Apart from Game of Thrones, but that’s for another post entirely.) You lured me in with your drop dead gorgeous costumes and back stabbingly brilliant French court, and now you’ve introduced murder and mayhem and dark twistedness I wouldn’t have thought you capable of, and I am hooked. Hooked, I tell you.
The series just keeps getting better, and this week’s episode was no exception.
It was great to see the fallout from the end of episode 16, with Bash and Kenna sniping at each other over their enforced marriage and all that it entails. I loved that everyone kept on bringing up Bash’s new title and revelling in its sheer ridiculousness, but whilst he seemed to understand how insane it was Bash did seem to be enjoying his new title and waving it at people’s, if only to see the look on their faces. Whilst they butted heads repeatedly throughout, that little moment at the end of the episode when Bash finally showed his chivalrous side and rescued Kenna from the King made my heart melt a little. I can’t wait to see where they take these two, because whilst I loved Bash and Mary previously that chapter is (for now at least) very closed whilst she tries to build her marriage with Francis. And also, the idea of two so very different people being forced into a situation where they have to learn to trust, and rely on each other or make life even more hellish than usual, is going to be fascinating to watch.
Speaking of Ladies In Waiting who seem to do very little in the way of 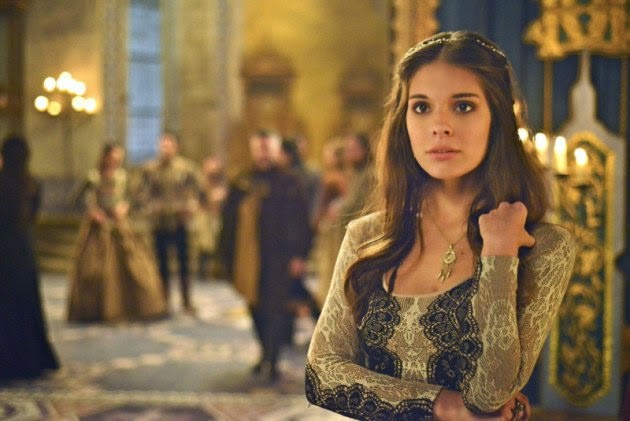 actually helping their Queen (apart from that moment of For Queen and Country that Kenna experienced), yay for Lola! I love Lola, and she’s had a bit of a raw deal recently so it was great to see her find someone that she seems to genuinely like, and a way of resolving her current predicament. But whilst part of me is thrilled for her, the other really isn’t convinced by Julien. I just don’t trust him, and I wish I could and I really hope I’m going to be proven wrong, but I have a horrible feeling that this reprieve for Lola is just a temporary one before everything kicks off.

But whilst it was quite quiet for her Ladies, Mary was having quite the week. I loved seeing her outrage and finally start to stand up for both herself and her country, and I loved that we got to see Queen Mary start to make an appearance. That moment with her countrymen bowing and offering their
fealty was fantastic, and we finally got to see the weight of her life and her choices start to sink in for her. Before she has been playing at power, but this 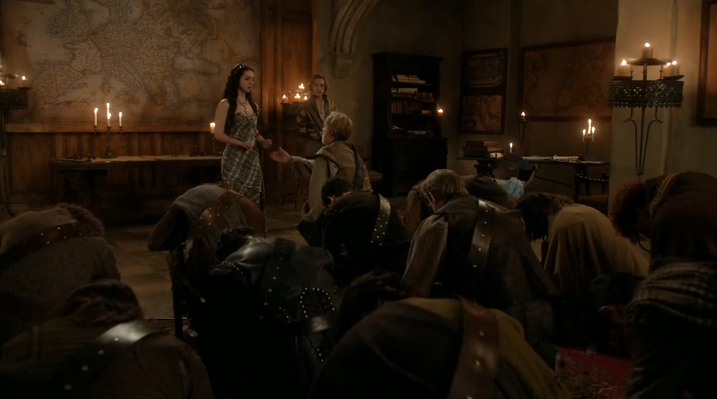 was her first really powerful scene in quite some time, and it was amazing to watch her start to come into her own and to grow up from the love plots that have been rife for the last six or so episodes.
One person who was decidedly not growing up this week was Francis, who is lovely and has both a pretty face and very pretty hair, but other than that is decidedly useless. I want good storylines for him, and since he finally got the girl and settled down to wedded bliss, he’s been used for nothing but procreating. He seemed to be so much on Mary’s side and loved the espionage and intrigue to overthrow the contract, but whilst there were things at stake for Mary that forced her to act, for Francis this was just a game. Which was never more apparent than that last scene where he thought Mary’s threat to the Queen was a bluff, that she would never dare to go through with such an act. This episode has highlighted the differences between Mary and Francis. Where she has been forced to grow up and start to wear the mantle of royalty and learn to lead and rule and protect, Francis is still very much a boy with no real position of power and as a result very little consequences for his actions. He likes playing at being a grown up, but he hasn’t yet reached the same place that Mary has, where loyalty and care for his country come above everything else, as they have to for people in their positions.
I can see that we’re going to start to have real power struggles between these two, as Mary tries to grow and develop and Francis can’t seem to understand or bear the fact that Mary is, at this point, more important and influential than him. Her attention is divided from being solely fixed on him, and Francis is not amused. 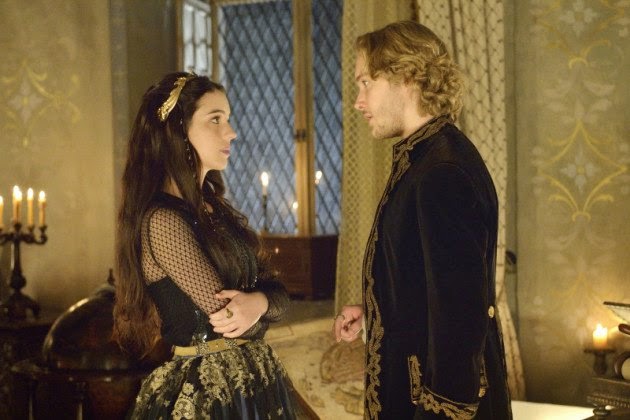 way.) I never expected that Reign would go this route with him, and I cannot wait to see where his storyline ends up. And what happens to Penelope as a result. She’s scheming and fantastic and utterly awful, and she isn’t going to give up her new power without a fight. Which I’m sure Catherine will be more than happy to give her.
I was a little baffled by this sidetracking with Catherine ending up in bed with a Scotsman. I mean it was great to see her let hair down a bit, but it seemed like a forced and ridiculously improbable (more so than usual) way of getting to the point where she found out that Mary knew about the contract. As ever she was fantastic though and I loved the showdowns with Mary. Catherine has a rare gift that makes her do truly terrible things and yet she manages to still keep the audience on her side, and as a result is one of the best characters this show has to offer.