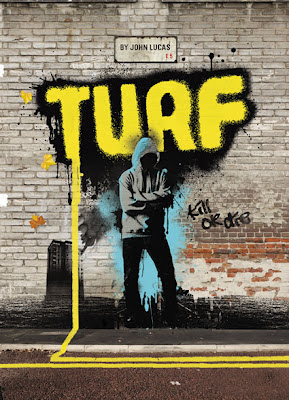 Jay's life seems pretty sorted: 15 years old and already a rising member of the notorious Blake Street Boyz gang, he takes his lessons from the street. With a knife in his pocket and his best friend Milk by his side, their days are spent fiercely defending their turf.
When Jay gets the chance to step up and become a senior of the Boyz, he faces the biggest decision of his life: he must stab and kill a classmate - and rival gang member - or face the consequences.
It doesn't take long for Jay's world to spiral out of control. As the line between right and wrong begins to fade, he finds no escape. Jay has to act, but at what and whose cost?
Set against the backdrop of London's inner-city tower blocks, in a world where killing can be easier than choosing what chocolate bar to eat, Turf is a story of intense friendship and brutal gang violence, of loyalty at any cost - even to the price of your own soul.

Turf was an incredibly strong and powerful book that completely blew me away. Anyone who reads this blog regularly knows that this isn’t my typical fare of book, but the premise was so intriguing, and the lovely people at Random House were so passionate when talking about this book that I had to give it a go.

The novel is fraught with tension, and Jay’s sense of entrapment is made very real for the reader – there’s almost a sense of claustrophobia the further into the book you get. Lucas creates a fascinating character in Jay. He’s become embroiled in this way of life because of where he lives and who he’s friends with – something that he never really realized he was choosing or the impact and implication of those choices, when he was a young boy. “Once you’re in there’s no way out.” The gang life dictates everything about his life, right down to which chocolate bar he can eat. But Jay is more than the sum of his part in the gang. He starts to question the rules that dictate his life, and as the layers peel back you discover a boy who really isn’t a hardened criminal or a killer. He’s just been dictated to by his status in the world, and become trapped in a desperate struggle between doing what’s right and what he’s been told, with people he cares about who would get dragged in and hurt if he makes the wrong choice.

There’s a religious and mythical tint to the story as Jay delves deeper and questions more about his life and his choices. It adds a subtle surreal glow to the events, so that some parts take on a more dream like quality.

It’s a harrowing read, and not at all easy. Lucas doesn’t shy away from some of the truly horrific people and acts committed and really paints a realistic picture of life in a London gang. There’s no pretention or stereotypes, it’s hard and gritty and painfully real.