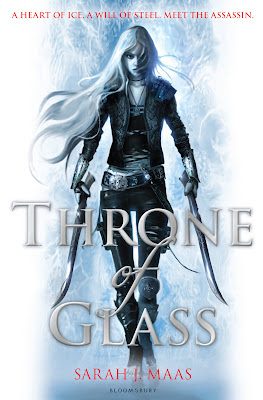 Huge thanks to Bloomsbury for sending me a copy to review.

After serving out a year of hard labour in the salt mines of Endovier for her crimes, 18-year-old assassin Celaena Sardothien is dragged before the Crown Prince. Prince Dorian offers her her freedom on one condition: she must act as his champion in a competition to find a new royal assassin.
Her opponents are men—thieves and assassins and warriors from across the empire, each sponsored by a member of the kings council. If she beats her opponents in a series of eliminations, she’ll serve the kingdom for three years and then be granted her freedom.
Celaena finds her training sessions with the captain of the guard, Westfall, challenging and exhilarating. But she’s bored stiff by court life. Things get a little more interesting when the prince starts to show interest in her... but it’s the gruff Captain Westfall who seems to understand her best.
Then one of the other contestants turns up dead... quickly followed by another. Can Celaena figure out who the killer is before she becomes a victim? As the young assassin investigates, her search leads her to discover a greater destiny than she could possibly have imagined.

If you haven’t yet heard the buzz about ‘Throne of Glass’ I can only assume that you have been living under a rock for the last couple of months, because this book is everywhere at the moment, and it is so completely deserved.

I don’t quite know what I was expecting when I started to read Throne of Glass, but it by far and away exceeded any expectations I might have had. It was one of the most engaging fantasy books I’ve read this year.

I loved Celaena as a heroine – she’s independent, a survivor and has a wicked sense of humour. Oh and I have I mentioned her awesome ninja like skills? No? She has epic skills. Truly, there were some incredible scenes that left me punching the air for awesome female leads. And there is just the right balance between being kick ass and independent and liking her fashion and perfumes and cosmetics and pretty dresses – it was the best of both worlds!
Celaena did come across as a little arrogant and cocky at points, but Maas managed to pitch it just right so I didn’t find it overwhelming and she still had a vulnerable and likeable side. It’s a very fine line and some people may find her irritating at moments, but on the whole I found her to be a really likeable, funny, smart and kick ass heroine. I wanted her to win, I was on her side the whole way through and I loved watching her put all the pieces together.

The world building is fantastic. It’s simple, but complex enough that it holds enough mystery and intrigue that I wanted to see more of it. I loved that what we learnt wasn’t just confined to the castle itself (which can so often be the case when the action is confined to one setting.) We learnt about the world, what it was like before, the hierarchy and dominance and the power plays. It was fascinating and kept me intrigued throughout the book and still leaves enough room for exploration in the second book.

The plot gallops along at quite a pace. It’s skilfully done, because we have time to get to know Celaena and the world, the competitors and her friends, but it never becomes too bogged down in details. There is enough to make the world come alive around you and make the whole thing leap off the page, but also enough intrigue and mystery to keep the story fresh and alive. Once I started reading I finished the book in a matter of hours. It’s filled with short chapters but each one hooks you in brilliantly to the next so ‘just one more chapter’ quickly becomes another twenty…

There are enough questions to keep the reader guessing – some have decidedly more obvious answers than others, and there are some odd scenes designed to throw you of track, but don’t quite manage to succeed. However most of the intrigue is wrapped up nicely by the end of the book, but there are enough overarching questions that again, will carry the reader and the interest into a second book.

The book gave a lot of really great action scenes, but I felt that with all the hype about how good Celaena is, we never really got to see her shine. I’m really hoping that the second book gives us more of a view of her awesome skills, because we definitely had hints of them that left me desperate for more!

The only point that let down some of the book for me was the love triangle. On the whole it was handled really well, there were no cringey moments where love was suddenly declared, and there were no declarations of eternal love and soul mates (which always makes me happy, they so rarely play out right.) However, it did feel a little bit like Prince Dorian was only in the triangle because he was pretty and hell Celaena was pretty, and pretty people should stick together. I didn’t really feel like there was a huge connection between them. Choal on the other hand, oh my… His and Celaena’s relationship was built up beautifully, there was no awkwardness of forced moments, I truly believed the friendship, the odd camaraderie and the genuine emotion that grew between them. I either would have liked to see more of their relationship and forgotten Dorian in that respect, or to see some more time spent building up Dorian and Celaena in the same way. I still enjoyed the triangle, it just tipped it from something awesome into just enjoyable for me, which was a shame given how much I loved the rest of the book.

So whatever your preconceptions about this book, put them away and give it a go. It’s a fantastic fantasy novel, one that I enjoyed immensely and can’t wait to come back to. I have never read the original fiction format that it was posted in online, but I can tell you it is a truly fantastic piece of work. Maas has created a brilliant world, a fantastic heroine and I can’t wait to see where she takes them next.