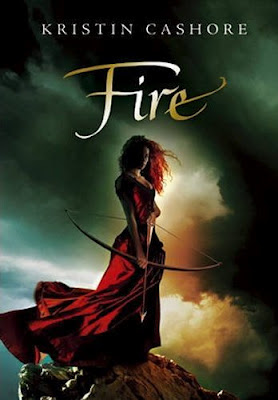 It is not a peaceful time in the Dells. In King City, the young King Nash is clinging to the throne, while rebel lords in the north and south build armies to unseat him. War is coming. And the mountains and forest are filled with spies and thieves. This is where Fire lives, a girl whose beauty is impossibly irresistible and who can control the minds of everyone around her.
Exquisitely romantic, this companion to the highly praised Graceling has an entirely new cast of characters, save for one person who plays a pivotal role in both books. You don’t need to have read Graceling to love Fire. But if you haven’t, you’ll be dying to read it next.

I have to be honest, when I finished ‘Graceling’ and realized that the next novel had absolutely nothing really to do with Po and Katsa, I didn’t want to read it. I pouted, I whinged, and I stared mournfully at ‘Graceling’ and thought about how much I loved it.

And then I stopped wallowing and started ‘Fire’. And yes admittedly it did take me a couple of chapters to get over the fact that it was so different from ‘Graceling’ but then I stopped comparing and just got swept away by it.

Cashore proved to be a master storyteller with ‘Graceling’ and has firmly cemented her status with (if possible) the even better ‘Fire’. It’s an utterly brilliant companion novel that takes a step away from the world and characters in ‘Graceling’ to give substance, texture and backstory to the events that have already unfolded, and those yet to come in ‘Bitterblue’.

It was an utterly beautiful novel, full of elegantly understated prose that was simplistic but completely spellbinding. And just as in her first book, Cashore creates an incredible blend of fantasy with compelling characters and myths and politics, intrigue and danger, and love.

Fire was a fascinating her heroine, strong and independent, but at the same time a complete contrast to Katsa. She appears softer and more fragile at moments, but never loses her core strength. So determined to do what is right, to atone for her father’s mistakes and failings she was a completely captivating heroine who pulled me right into her story.

I felt as though I identified more with her than Katsa, with her inner strength as opposed to physical strength and burning determination and strength of will. Not to say that Katsa isn’t those things as well, but Fire embodies that determination and fierceness with less of the accompanying anger that Katsa exudes, and there is a fragility to Fire that made her at times stronger and more vulnerable, that made me want to protect her in a way I hadn’t felt for Katsa.

As with ‘Graceling’ Cashore creates a host of supporting characters that create a fantastic cast for the book; Brigan completely melted me in a way that I hadn’t really felt with Po. There was something more ‘human’ in these characters – ironic given Fire’s monster heritage. It was such a delicious blend that meant that I was completely pulled in and swept away, something I’ve only experienced in high fantasy with Tamora Pierce and Maria V Snyder.

I thought that how Cashore chose to handle Leck as the master villain was fantastic. We are introduced to him in ‘Graceling’ and we certainly start to see what terrible things he has done with his grace, but he never really developed fully into the monster that was hinted at. So to go back to his roots, to his very beginning and see more of his character, more of the events that shaped him as a person was fascinating. It made him that much more real for me, and the stakes that much higher. And despite already knowing what will happen that does not diminish the threat and fear that are tangible throughout his appearance in ‘Fire’.

Whilst I love the different elements of both books, there was something pitched absolutely perfectly that spoke to me more in this book than I’d experienced with the first book. The characters were brilliantly nuanced, showing both their strengths and fragility with their weaknesses. The intrigue of politics and war, the subtle shifts in power in the relationships and the development as each of them came into their own. It was a brilliant cast that worked perfectly to make this an emotionally engaging and satisfying read.

Cashore’s imagination is utterly incredible. The depth and breadth to this series so far is unbelievable. She has shot very quickly to one of my favourite authors, and this series to one of my all-time favourites. All that remains now is to see how ‘Bitterblue’ fares and whether the threads can all be pulled together to create one seamless whole.

A beautiful companion novel that stands on its own as well, Cashore has firmly marked herself as one to watch with this beautiful and breath taking series.