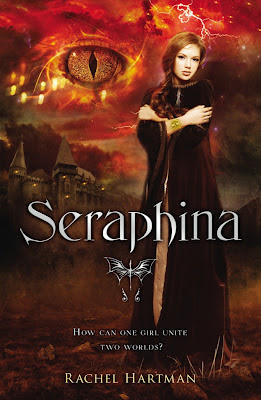 Huge thanks to Harriet at Random House for sending me a copy to review.

Four decades of peace have done little to ease the mistrust between humans and dragons in the kingdom of Goredd. Folding themselves into human shape, dragons attend court as ambassadors, and lend their rational, mathematical minds to universities as scholars and teachers. As the treaty's anniversary draws near, however, tensions are high.
Seraphina Dombegh has reason to fear both sides. An unusually gifted musician, she joins the court just as a member of the royal family is murdered—in suspiciously draconian fashion. Seraphina is drawn into the investigation, partnering with the captain of the Queen's Guard, the dangerously perceptive Prince Lucian Kiggs. While they begin to uncover hints of a sinister plot to destroy the peace, Seraphina struggles to protect her own secret, the secret behind her musical gift, one so terrible that its discovery could mean her very life.
In her exquisitely written fantasy debut, Rachel Hartman creates a rich, complex, and utterly original world. Seraphina's tortuous journey to self-acceptance is one readers will remember long after they've turned the final page.

I never fully expected Seraphina to capture me quite as it did. I was anticipating likeing it, to enjoy reading it, but it was one of those unexpected surprises that creeps up on you and becomes a little part of your soul whilst you read. I closed the book and sat with it in my hands, and wanted nothing more than to open it again at the beginning and start again. It has tailed me round for days after I’ve finished it, dogging my thoughts until I may well cave and go back to absorb the world of Seraphina again.

‘…as if I have intuited the One Equation, seen the numbers behind the moon and stars, behind mountains and history, art and death and yearning, as if my comprehension is large enough that it can encompass universes, from beginning to the end of time.’

It didn’t get off to the best start with me, taking its time to draw me in. There’s a fair amount of scene setting and backstory to get through which Hartman handles deftly. Not so much that the reader is overwhelmed though, in fact she pitches it just right to give the reader enough to go on without throwing every piece of information to us about the world we’re stepping into.

In fact there was quite a lot that I didn’t know about and that I wanted to find out more, but because some of these things are such a regular part of Seraphina’s world we don’t get any explanation, they are just there, everyday and normal for her. I’d love to find out so much more about the world. It whet my appetite and left me desperate for more, whereas I normally leave fantasy books feeling like my brain is saturated with excess information.

The world itself is incredible, it’s so rich and vibrant and detailed, and yet at the same time the reader is not treated like an outsider, the bare basics are explained and the rest you’re expected to pick up as you go along – which delighted me more than I can express. I love books that don’t attempt to spoon feed the reader.

It’s a challenging world with so much vivid life spilling out from the pages, so much to hold together to weave into a narrative, and yet Hartman tackles it with ease and skill. I was impressed and completely engrossed in the story. In this new world, in the politics and the religion and the intrigue, and of course the dragons. I loved the dragons. We as humans are always attempting to humanize other creatures, to make them easier to comprehend, to make them emotional and easily understandable. And Hartman doesn’t at all. They are a species apart. Yes there are bridges between the two, they are more similar than they would probably care to admit, but I was impressed that these dragons were just that, they had an entirely different mind-set and pattern of thought and construct and emotion. It was fascinating to read and an incredible feat of writing to keep them so separate and yet to still make them relatable and fascinating to the reader.

The writing was fantastic. At times painfully beautiful, with a lyrical quality that has knocked Hartman up into one of my favourite writers. I found myself doing something I never do with books – folding down corners of pages to mark passages that I particularly loved.

‘I became the very air; I was full of stars. I was the soaring spaces between the spires of the cathedral, the solemn breath of chimneys, a whispered prayer upon the winter wind. I was silence, and I was music, one clear transcendent chord rising toward Heaven.’

I loved the characters, as I’ve touched on talking about the dragons, they were incredibly constructed, real and lifelike and utterly flawed and completely fantastic as a result. I loved Seraphina from the start, and the secondary characters quickly fell in behind her to create a fantastic cast to lead me through the book. She was such a likeable heroine - she was flawed and self concious and full of fear, but at the same time incredibly brave and kind and strong. She was a fantastic role model and I loved her determination to do what was right, and to protect those she loved.
I adored Kiggs and the strange friendship that develops between him and Seraphina, the odd philosophical discussions and moments of candid frankness with the other.

‘The world inside myself is vaster and richer than this paltry plain, peopled with mere galaxies and gods.’

And then we come to the plot, which had me guessing and second guessing myself right the way through. This was no simple straight line from A to B, this was a fantastic journey through foothills and mountains with so many different threads and characters and storylines that I had no idea where we were heading, but settled in and just enjoyed the ride. It set everything up so fantastically for the next book in the series, it felt almost like a prelude to the main event, but in no way any less enjoyable or diminished as a result. I loved every moment of the journey and will quite happily go back and revisit it again and again until I have more to read from Hartman!

‘I feel this music in my very blood. This is what it means to be me, right here, right now, solid flesh, ethereal air, eternal motion. I feel this, and it is true beyond truth.’

I would highly recommend this to anyone who loves a fantastically written book – never mind the fantasy elements and the dragons. Read this for the writing, for the fantastic plot and the brilliantly written characters. Yes the dragons and fantasy provide an extra element to the book, and a fantastic one at that, but Hartman is a new force to be reckoned with if her debut writing is anything to go by, and I recommend getting in and reading this before this book sweeps the masses and you’re left behind.

‘We were all monsters and bastards, and we were all beautiful.’

If you’re interested and would like to be in with a chance of winning a brand spanking new ARC of Seraphina, you can enter my giveaway here!
Posted by Rosy at 13:00