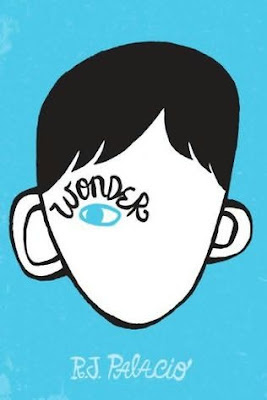 With thanks to Random House Children’s Books for sending me a copy to review.

I won't describe what I look like. Whatever you're thinking, it's probably worse.
August (Auggie) Pullman was born with a facial deformity that prevented him from going to a mainstream school—until now. He's about to start 5th grade at Beecher Prep, and if you've ever been the new kid then you know how hard that can be. The thing is Auggie's just an ordinary kid, with an extraordinary face. But can he convince his new classmates that he's just like them, despite appearances?
R. J. Palacio has written a spare, warm, uplifting story that will have readers laughing one minute and wiping away tears the next. With wonderfully realistic family interactions (flawed, but loving), lively school scenes, and short chapters, Wonder is accessible to readers of all levels.

I had heard amazing things about ‘Wonder’ before I started reading it, and they truly didn’t exaggerate.

I was very wary going into the book, after all, you never know with a subject that sometimes requires delicate handling whether the author will handle it or drop it on the floor… hard…

Fortunately R J Palacio tackles it beautifully. The book offers several different viewpoints so that we get to see not only Auggie’s view of himself and the world, but how other people view him to. It also offers us an insight so we see situations from various different angles so what from one person seemed a terribly mean thing to do, would suddenly be seen from a whole new angle.

The different view varied from seeing how Auggie’s sister copes with constantly being pushed to the side in favour of her brother, to how his new friends at school felt about him, to his sister’s boyfriend. It was fascinating and offered a whole new perspective which kept the novel fresh throughout.

Of course the largest sections were from Auggie’s point of view and he was a fascinating narrator. He truly was extraordinary, with his view of the world, of himself, his strength, his kindness and his determination, particularly in the face of some truly horrible taunts, fights and unkindness from those around him.

It was a thought provoking story handled very delicately and I found myself totally enthralled with Auggie’s story. How it feels to be on the inside of a perfectly normal boy who just drew the short straw of the gene pool. He’s not pampered or spoilt, nor is he frustrating, he is an incredibly fresh narrator and I loved sharing his story with him.

It was heart breaking at points to see the cruelty of those around him – not just kids, but adults. There are a series of emails part way through the book that quite literally made my blood boil, and some of the awful things the kids said made me want to reach in and wrap Auggie up in a hug.

My only complaints were that there wasn’t a vast amount of difference between the voices. They all read very much the same, and if I hadn’t been told at the start of each section who was speaking it wouldn’t have been particularly obvious.

It was also, I have to admit a decidedly cheesy ending, but actually, I like happy endings to it didn’t really both me – I know that some people might find it a little too sweet after the trials of the book though.

It does come across as one very decided, white middles class view point of the world, which may be frustrating to some, but because that is the only view point Auggie really has, I didn’t find it too grating.

This truly is a wonderful book – thought provoking, funny, incredibly hard to read at some points, and joyful at others. I would recommend reading it with a box of tissues though…