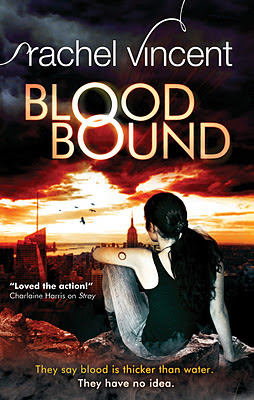 Bound by blood, condemned by fate
As a bloodtracker, Liv is extremely powerful. And in a world where power is a commodity that can get you killed, Liv's learnt to survive by her own rules.
Rule number one? Trust no one.
But when a friend's daughter goes missing, Liv is bound by a potent magical oath. She can't rest until the child is safe.
And that means trusting her dangerous ex, Cam.
A sinister prophecy tells that she and Cam will be the death of each other, yet Liv's tired of being a slave to destiny. She's ready to play the forces controlling her world at their own game.
No matter what the cost.

I really enjoyed Rachel Vincent’s young adult series about Banshees, so I was curious to see what happened when the stakes were upped and we went on to adult. And oh my word, it was epic. I mean, the young adult series is brilliant, but now it kind of feels like there was something missing, and that missing component was in ‘Blood Bound’.

The setting was brilliant – a dark gritty place that felt like it was never fully light in my imagination. It was brilliant, a city split into three with two major powers fighting for allegiances over a dwindling number of people that are free. The entire concept appealed to me on every level.

Liv was a hard fighting girl with a softer side, but one who wasn’t afraid to do nasty things to people who hurt those she loved. She comes across really well, pitched absolutely brilliantly so she doesn’t come across as an unfeeling bitch, but is hard enough that the respect she’s garnered is completely believable.

I liked the changing perspectives between Liv and Cam – I did find Cam’s voice a little bit too feminine to start with, but it settles down further into the novel and completely swept me away.

The host of secondary characters are really well constructed and provide a wealth of backstory that really drives the plot forward. And the plot, oh wow. It’s just bursting with awesomeness. The whole premise of Skilled people and the different types of skills. I loved Liv being able to track people by their blood, but I’m afraid the Traveller’s really took it for me – walking through one shadow and coming out in another shadow anywhere you want? Oh I want a Skill please…

I loved that you literally couldn’t trust anyone. Seriously, the twists and turns and punches to the gut had me reeling all the way through. Just when you think you’ve got a handle on how things may go, Vincent completely whips the rug out from under you.

The only thing I found a little bit frustrating was the pacing. There’s all this fabulous build up, and then I realized that there were only 40 or so pages left of the book, and it just didn’t seem like enough time to come to a satisfactory conclusion. Vincent does actually pull it off, and exceptionally well, and maybe that brief amount of time makes everything that much quicker and gut wrenching, but I did feel like I wanted a little more of it.

With the promise of a second book ‘Shadow Bound’ I am completely on board with this series – it’s everything I love in an urban fantasy book, and I can’t wait to see where Vincent takes this next.